"The fastest thing I ever saw was the Takea Shark, deep beneath the sea. It's terribly dangerous, but legend has it that the Takea will teach its Speed to anyone that can catch it!"
— Kai, The Final Chronicle

Takea, also known as the King of Sharks, are fierce shark-like Rahi. 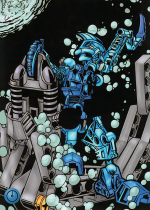 The Takea species was created by the Makuta using Viruses and Liquid Protodermis as one of the Rahi to inhabit the Matoran Universe.[3]

Takea made their home in the Silver Seas of the Matoran Universe, specifically those around the island of Metru Nui. There, Takea were known to attack Matoran ships purely for sport.[4]

After the Great Cataclysm struck, many Takea migrated through the Great Barrier. Some allied themselves with Mavrah, and later fought the Toa Metru.[5] The rest migrated to the newly-created island of Mata Nui.[6] Simultaneously, many Takea ventured into the waters of Aqua Magna, where they were mutated by Pit Mutagen.[7]

When the Bohrok Swarms were awakened on Mata Nui, Gahlok activity off the coasts forced Takea closer to the shore, where they interrupted migratory patterns of Ruki schools, as well as becoming a threat to the fishing Taku birds.[8]

After the defeat of the Bohrok-Kal, the Ga-Matoran Hahli chased a Takea underwater in Ga-Wahi to train in the skill of Speed for the Kolhii Tournament.[9]

When the Toa Nuva intentionally unleashed the Bohrok, these Takea migrated back to Metru Nui.[10]

After the Great Spirit Robot was critically damaged in the Battle of Bara Magna, the surviving Takea were evacuated onto Spherus Magna.[1]

When the Great Cataclysm shattered the Pit and allowed access to the Black Water above the prison, several Takea traveled to these waters and were mutated by exposure to the Pit Mutagen. Pridak later used these specimens in his army. The Barraki leader also enlisted Nocturn to create his Shark Tooth Blades by fusing more than ten thousand Takea teeth together.[11]

Approximately 1,000 years later, Defilak built a submarine whose design was inspired by the Takea. When he, Sarda, Gar, and Idris traveled in the submarine to investigate the recent disappearances, they were attacked from all sides by a school of Takea, led by Pridak. The Takea excitedly destroyed the submarine, but were called back by Pridak, who captured the Matoran and brought them to a cave for questioning. When they refused to tell him the whereabouts of the Kanohi Ignika, Pridak threw Sarda into a school of hungry Takea.[12] Unbeknownst to those in the cave, Toa Lesovikk saved Sarda, unleashing a cyclone that scattered the sharks away.[13]

The Toa Mahri later arrived in the Pit and attempted a faux alliance with the Barraki. The Barraki placed them in sea caves guarded by their servitors, including several Takea. Toa Hewkii used his Kanohi Garai to cut off his guard's gravity, sending the Takea "flying" through the ocean.

Accompanied by a contingent of more than two hundred Takea, Pridak confronted Matoro and Maxilos on the Takea's feeding grounds and demanded the Mask of Life's location. Matoro used his Kanohi Tryna and reanimated the skeletons of the sharks' long-dead victims to attack. At the same time, a group of Takea swam over a trench where Hewkii and Nuparu were cornered by a group of Ehlek's Venom Eels. Hewkii increased the Takea's gravity until they slammed into the eels, and both sides began to devour each other. Ehlek mistook Hewkii's attack as Pridak's, and led his forces to join the growing battle between Matoro and Pridak. The Takea suffered heavy casualties in the vicious battle.[14]

Some time later, Pridak summoned the remaining Takea for a mass assault on Maxilos, revealed to be holding the spirit of Makuta Teridax. The sharks severely damaged Maxilos' body, before Pridak called them away to attack the Toa Mahri and reclaim the Mask of Life.[15]

A mutated Takea devoured the cursed Gadunka after it had shrunk back to its normal size.[16]

After the Toa Mahri were spirited away from the Pit, Pridak gathered several mutant Takea to confront Hydraxon's replica and reveal evidence that he was not the original Hydraxon. Hydraxon defeated the Takea sharks with his Cordak Blaster, then dispatched and jailed the Barraki leader.[7]

Some months later, Mata Nui used the powers of the Kanohi Ignika and the Prototype Robot in conjunction to cure the Takea and others of their mutations, returning them to their original forms.[17]

Hahli training in Speed by swimming after a Takea

Takea are natural underwater predators, attacking and feeding upon weaker Rahi. Takea are natural enemies of Tarakava, although the sharks consider anything in the water an enemy,[2] sometimes even other Takea.[citation needed] Dubbed the 'King of Sharks', just the rumor of a Takea in the water was enough to send the Matoran of Ga-Koro scrambling to shore.[6]

The Takea was released as part of the 10023 Bionicle Master Builder Set. It used forty-eight of the set's 102 pieces. It would open and close its mouth when its dorsal fin was moved forwards and backwards.

Two different combinations of a mutated Takea shark and Underwater Ray were released in the 2007 playset 8927 Toa Terrain Crawler.

A Takea in BIONICLE: Maze of Shadows