"Go back to Mahri Nui. Tell them ... tell them I wanted a new adventure."
— Sarda to Idris, Dreams of Destruction

Sarda is a Ta-Matoran who lived in Mahri Nui. After encountering his old friend Toa Lesovikk, he aided him and Hydraxon in recapturing the escaped prisoners of the Pit.

Sarda originally lived on an island with Lesovikk and Idris, his best friends.[4] Lesovikk soon became a Toa and the leader of the Toa Cordak, and left to battle monsters and other threats to the Matoran. Some time afterwards, the local Turaga went mad and shipped the entire Matoran population to Karzahni, including Sarda and Idris.[5]

In his realm, Karzahni rebuilt Sarda into a weaker form and later sent him to the Southern Continent. When the Great Cataclysm struck, the tremors sent the portion of land where Sarda lived to the surface of Aqua Magna.[6]

Years after that, the Matoran built another village and named it Mahri Nui, but it broke off and sank into the dark waters of the Pit. There, Sarda was exposed to the mutagen in the water long enough to be partially reverted to his original, stronger, form.

Sarda and Idris lure Karzahni into the trap.

Sarda, along with Defilak, Gar, and Idris, was part of an underwater expedition to the depths of the Pit in Defilak's Submarine. However, the submarine was destroyed, and the Matoran were captured by the Barraki. Sarda was soon thrown into a school of Takea sharks by Pridak,[7] but was saved by Toa Lesovikk, whom he recognized.[8] Lesovikk began to recount to Sarda the tale of his voyages. Even as the two friends reunited, Karzahni himself arrived and did battle with Lesovikk.[9] During the fight, Sarda was given a horrific vision by Karzahni's Kanohi Olisi, and fainted from the shock. His air bubble ran out,[10] and he was exposed again to the mutagenic waters of the Pit, turning him into a water-breather. Lesovikk saved Sarda and noticed Sarda's changes, then continued to tell his story. Sarda urged Lesovikk to stop Karzahni before he could harm the Matoran, and the duo set off to bring an end to the tyrant.[11]

Along the way, he and Lesovikk came across Idris, who had also been mutated into a water-breather, and invited her to join their group. The three of them tracked down Karzahni and watched him fight a brief but furious battle with a Maxilos robot that resulted in Karzahni's mind being torn to shreds. Sarda and Idris wondered if Karzahni was still a threat, but Lesovikk related a tale of a wounded Rock Lion and decided to follow Karzahni and capture him.[12]

Using an abandoned weapons cache, the trio created a device that would trap Karzahni, and tracked him to a sea cave where he had taken refuge. However, as they were planning their attack, Lesovikk became trapped in one of Karzahni's visions.[13] The Matoran tried and failed to wake Lesovikk, and Sarda decided to finish the job in his place. They finished rigging the makeshift trap and entered the cave to lure Karzahni out of hiding. Lesovikk finally broke free of the vision and saved the Matoran, just before Karzahni sprung the trap. Botar then took the tyrant away.

Lesovikk used more abandoned equipment and modified a Breathing Helmet to allow the wearer to breath water while functioning on land. Sarda insisted that Idris to take it and tell the Matoran about Lesovikk, while Sarda would go with Lesovikk, as he felt the Toa needed a friend. Lesovikk agreed, and both swam away into the ocean.[14]

After a brief confrontation with Hydraxon, Sarda and Lesovikk allied with the jailer, and began hunting down escaped Pit prisoners.[15][16] They later left the Pit to help the Order of Mata Nui in their war with the Brotherhood of Makuta.[17]

Following the Battle of Bara Magna, in which the Great Spirit Robot was critically damaged, Sarda and his friends evacuated the Matoran Universe for Spherus Magna and was cured of the Pit Mutagen's effects by the Ignika, becoming amphibious.[3]

Lesovikk and Sarda eventually parted when the Toa went to investigate the disappearance of Karzahni,[18] while Sarda began working with the other Matoran on Bara Magna.[19]

Due to his exposure to the waters of the Pit after his air bubble ran out, Sarda became a water-breather. After Mata Nui's use of the Ignika, Sarda regained the ability to breathe air, in addition to water, and the negative aspects of his mutations were reversed.

Sarda is known for his courage, as demonstrated when he and Idris set up the trap for Karzahni. He also proved his nobility when he gave Idris the sole device that allowed a water-breather to move about on land.

As a Ta-Matoran, Sarda possesses natural heat resistance due to his latent elemental power of fire.

Sarda has Shredder Claws[2] and a variation of the Electro-Blade,[1] which gives off a powerful electric burst, but it often does not work because of the mutagen in the waters of the Pit. 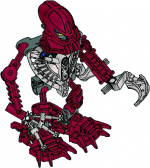 Sarda is a part of the 8940 Karzahni set, along with Idris and the trap used in Dreams of Destruction. This set depicts Sarda in his mutated form, which varies slightly from the standard form of a Matoran of Mahri Nui in that it features gills.

"And right now, I have friends back in that cave who need rescuing. If you're any good with that sword, I could use your help."
— Sarda to Lesovikk, Dreams of Destruction

"I remember Lesovikk defending our home from Rahi beasts and anything else that threatened us... I remember when he and his team left, never to return... at least not while I was still there. He's not a failure – he never was – he's a hero!"
— Sarda, Dreams of Destruction