The series is comprised of 310 unique game cards, the first 220 from the base game, and the remaining 90 from the Rahi Challenge expansion. Both the base game and the expansion feature standard cards and some holographic cards. Typically the holographic card variants were both rarer and more powerful in-game. However some controversy surrounds card #197 as it appeared to be unobtainable in the First Edition print of the series, and was significantly rarer than other cards in subsequent printing runs.

While the majority of cards printed in the series were playable cards, there were several Illustrated Story Cards depicting moments from the Bionicle series, however as the card-game is not considered canon the events depicted may not be entirely based on the Toa's official storyline.

Though it is its own game, BIONICLE: Bohrok Swarm, another TCG created by Upperdeck, is compatible with and uses the base rules of Quest for the Masks.

Quest for the Masks: Base Game.

There were two primary ways of obtaining game cards; Booster Packs, and Deck boxes. However the game requires at least one player to own a Starter Deck, as the Starter Deck supplied both the playing board required for the game as well as the infected mask game action card necessary for building a deck.

There were 3 decks in total, each one displaying a pair of Toa Mata, which were packaged with a random Kanohi of the respective Toa's color. Each deck box was colored differently to represent their respective Toa pairings. The pairs feature the following Toa:

The alternative way to obtain Quest for the Mask cards were via Booster Packs; these were sealed packets, typically containing nine cards per packet along with a white card listing Instructions to build your own Bionicle deck with Booster cards.
There were two primary retail methods for Booster Packs sold during the series lifetime.

These booster packs could be any of the following packet types:

Furthermore all the uncommon slots is always taken up by the aforementioned Toa, Great Mask and Turaga card reprints. The 3 rare slots are shared between story cards and non holographic Game Action, Mission and Great Mask Challenge cards and the ultra rare slot is taken by a holographic/foil card between numbers 161-220. 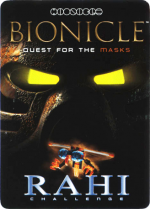 There are five primary types of cards used in the game, each with a different use within the game. The rarity of each card is denoted by a [ 1 ] character with a colored background

Red denotes cards of rarity ultra rare all of them being holographic.

In the base game, there are four subtypes of Game Action Cards: Infected Masks, Bonus, Reward and Penalty. The Rahi Challenge also introduced two new types: Rahi Defend and Earthquake, with Earthquake being just a one-off card.

The Rahi Challenge cards expand the Quest for the Masks card game with Rahi-oriented content, extending the number of collectible cards from 220 to 310. Of these 90 new cards, 36 were Illustrated Story Cards, 27 non holographic cards with new card types and 27 new holographic cards with the aforementioned new card types. The only returning card types were mission, penalty and reward, and this expansion didn’t feature any starter deck rarity cards. Each card for the new Rahi deck features a Nui-Rama on the back, in front of the Hau of the base game cards to help distinguish the new cards.

A Rahi Challenge can only be started at the beginning of a turn. Starting one is a full-move action. To draw a Rahi card, the player must walk to a game action space and choose whether to draw from the game action deck or the Rahi deck. In cases of a tie the Toa wins the Rahi Challenge.

To play a Rahi challenge

Great mask cards work with a Rahi challenge just like in a Great Mask challenge. Game action cards are also allowed during a Rahi Challenge.

Because of poor sales for the overall game, no Deck Boxes were released for the Rahi Challenge expansion, unlike the Quest for the Masks base game. These were only available as booster packs of nine cards. Moreover, Rahi challenge was only sold in the US, and the set is quite rare.