"But their nature proved to be so aggressive that they would attack innocents and even each other."
— Rahaga Iruini, Rahi Beasts

The Kavinika are wolf-like Rahi.

The Kavinika species was created by the Makuta using Viruses and Liquid Protodermis as one of the many species of Rahi to inhabit the Matoran Universe.[3]

A population of Kavinika settled in the undeveloped sectors of Po-Metru in Metru Nui. Due to their hostile natures, the Kavinika were later driven out of Po-Metru and "adopted" by Ga-Metru for use as guard Rahi to protect important buildings. The Matoran of Ga-Metru were ultimately unsuccessful in repurposing the Kavinika, and they quickly developed a reputation for attacking innocent Ga-Matoran. Removing them from schools and Protodermis labs proved extremely difficult and dangerous work. The Hapaka were once briefly used to drive them away, with mixed success.[4] The majority of the Kavinika population in Metru Nui continued to wander wild on the outskirts of Ga-Metru.[5]

After the Great Cataclysm, the Rahaga observed that Kavinika numbers in Ga-Metru were actually increasing. They theorized that some kind of experimental substance leaking from a damaged Ga-Matoran lab was causing the Kavinika to duplicate exponentially.[2]

During the Visorak invasion of Metru Nui, some Kavinika escaped the Visorak horde and wandered into Le-Wahi on the island of Mata Nui.[2] These specimens later returned to Metru Nui with the Matoran after Toa Takanuva's defeat of Makuta Teridax.[6]

500 years ago, when a troop of Visorak arrived late on Metru Nui, they found and caught a Kavinika and mutated it with Hordika Venom.[7]

After the Great Spirit Robot was critically damaged in the Battle of Bara Magna, many Kavinika left the Matoran Universe and immigrated to Spherus Magna.[1]

Mavrah owned a Rahi that resembled a cross between a Kavinika and a lizard. When Toa Metru Onewa tried to use his Kanohi Komau to control the mind of Mavrah, the Rahi screeched very loudly, due to the fact that this Kavinika could sense when a Kanohi was in use, similar to how a Kinloka rat can sense food from a distance. Later, after Whenua finished relaying the information about Metru Nui to Mavrah, his Kavinika began to screech again, sensing the use of Vakama's Huna.[8]

Mavrah's Kavinika later participated in a battle against the Toa Metru alongside the First Rahi.[9]

The Kavinika's defenses are its sharp teeth and claws. With its claws, the Kavinika can climb buildings to hide.[5] The behavior of the Kavinika is known to be aggressive and unpredictable. Kavinika are difficult to tame and liable to attack Matoran or other Kavinika.[2] 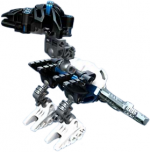 Mavrah's lizard-like Kavinika had the ability to sense when a Kanohi was in use, and screeched loudly whenever one was used.[8]

The Kavinika can be built out of the Matoran sets 8609 Tehutti, 8606 Vhisola, and 8612 Ehrye. Instructions for the Kavinika were included with the three sets.