The Kahu species, a sub-species of the Gukko,[3] was created by the Makuta using Viruses and Liquid Protodermis to be one of the Rahi to inhabit the Matoran Universe.[4]

When the Great Cataclysm brought about the creation of the island of Mata Nui, many Kahu migrated there and established themselves in Le-Wahi. The Le-Matoran Gukko Force utilized Kahu as flying steeds in their fights against infected Rahi of Le-Wahi. Some Kahu had Kanoka Launchers mounted on their backs for combat purposes. Le-Matoran could summon the bird using Flutes. Kahu were launched by a Matoran with signal Lightstones.[5] 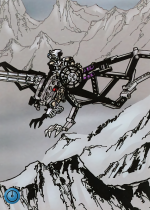 1,000 years later, the Kahu migrated back to the Matoran Universe when the Bohrok swarms were awakened to cleanse the island.[6]

After the Great Spirit Robot was critically damaged in the Battle of Bara Magna, many Kahu emigrated from the Matoran Universe to Spherus Magna.[1]

A Kahu bird was tamed by Kongu on Mata Nui. He mounted a disk launcher on the bird, and rode it several times in the Great War. When the Nui-Rama swarm attacked, Kongu asked Takua to be his second on the Kahu. The Kahu was later injured by an infected Lewa.[5] The Kahu soon recovered and assisted Kongu in the Battle for Kini-Nui.[7]

A Kahu's wings light up with energy during flight. Kahu are strong enough to carry two Matoran riders, allowing for one Matoran to pilot the bird and a second Matoran to fire a disk launcher.[5]

A Kahu in set form

The Kahu model can be built out of the two Nui-Jaga in the 8548 Nui-Jaga set released in 2001. The instructions for this combination could be found in the purple Nui-Jaga instruction booklets. Its lower body featured a trigger that allowed the Kahu's mouth to open and close.

"Traveler, will you be my second? My Kahu stays treebound without a Disc-thrower!"
— Kongu, Mata Nui Online Game