The Hikaki species was created by the Makuta using Viruses and liquid Protodermis to be one of the Rahi to inhabit the Matoran Universe.[3]

On Metru Nui, the Hikaki dwelled in the Ta-Metru Foundries, sharing their territory with the Furnace Salamander.[4] Following the Great Cataclysm, some Hikaki migrated to the newly-formed island of Mata Nui, settling in Ta-Wahi surrounding the Mangai Volcano.[5]

During the attack of the Bohrok swarms, the Hikaki were forced to abandon their ancient nesting grounds.[6] They were eventually permanently displaced by the actions of the Kohrak swarm, and returned to the Matoran Universe.[7]

After the Great Spirit Robot was critically damaged in the Battle of Bara Magna, many Hikaki emigrated from the Matoran Universe to Spherus Magna.[1]

Hikaki seem to thrive amidst molten lava, and an old Matoran legend says that the Hikaki actually feed on the fire. Hikaki are dangerous mainly when their nests are disturbed.[5] A cold-adapted variant of Hikaki could be found in Ko-Wahi.[10] 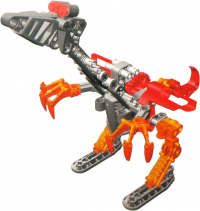 A Hikaki in set form

The Hikaki was released as part of the 10023 BIONICLE Master Builder Set. It used 73 of the set's 102 pieces. Rotating its tail would make its neck move up or down. The Hikaki was the largest model in the set's instruction manual, and thus was the one featured most prominently in advertising and packaging.