"The Dikapi is a hardy desert bird with a strong beak and a distinctive flute-like whistle. Although it cannot fly, it can run for hours upon end without stopping for food or rest. Some Dikapi have been trained by the Matoran of Po-Koro to carry scouts and messengers quickly across the sands."
— LEGO Club

The Dikapi species was created by the Makuta using Viruses and Liquid Protodermis to be one of the Rahi to inhabit the Matoran Universe.[3]

When the Great Cataclysm caused the creation of the island of Mata Nui, a population of Dikapi migrated to the island from an unknown region and integrated into the Po-Wahi ecosystem.[1] The Po-Matoran tamed the Dikapi to act as scouts and messengers rode trained Dikapi across the vastness of the Po-Wahi deserts.[4]

1,000 years later, the Dikapi migrated with the Po-Matoran to Metru Nui.[5]

After the Great Spirit Robot was critically damaged in the Battle of Bara Magna, many Dikapi emigrated from the Matoran Universe to Spherus Magna.[2]

Identifiable by a flute-like, whistling cry, these Rahi are notable for their strong beaks and endurance, running for hours without stopping to refresh. 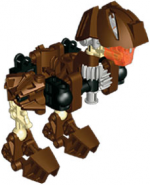 A Dikapi in set form

The Dikapi can be built out of 8531 Pohatu and 8542 Onewa sets. Turning its left wing caused its head to turn and vice-versa. Instructions were once on the LEGO Club website.