"Catching a Gahlok is like trying to hold onto an eel with one wet hand. So think carefully before you interrupt their work. They will never react the same way twice and they will never strike the same place twice."
— Turaga Nokama, BIONICLE.com 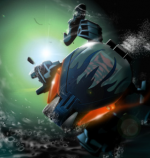 Gahlok are created when Av-Matoran complete their destiny and transform into mechanical insectoids. They are then transported to Bohrok Nests to await the signal to cleanse the island camouflage of the Great Spirit Mata Nui. They are aided by the Bohrok Va Gahlok Va.

The Gahlok swarms beneath the island of Mata Nui were awakened by Makuta Teridax, after his defeat by the Toa Mata. Soon after awakening, a squad of Gahlok traveled to Onu-Koro. After being alerted to this, Whenua called for an evacuation of the village. While Taipu and Onepu helped with the exodus, Nuparu gathered some supplies. When the Onu-Matoran escaped the tunnel, the Gahlok unleashed a wave of water, flooding the cavern, and washing Onepu, Nuparu, and Taipu away. When the three Matoran woke up, they found themselves in a darkened cavern. As Nuparu fetched a Lightstone, they found themselves in the same cavern as a disabled Gahlok. Thinking, Nuparu began using the Gahlok's parts to build an invention, while Onepu and Taipu helped. At last, Nuparu completed the job, and used it to destroy the boulder blocking their path. Returning to their abandoned village, Nuparu began battling the Gahlok in his invention, the Boxor. He succeeded, and several Gahlok fled.

In a different part of the island, Toa Gali and Pohatu were busy collecting Krana from Bohrok. After defeating several Tahnok, they found themselves among Gahlok. After much work, the two of them defeated the swarm, earning more Krana. The Toa were victorious in many more battles, and ended up defeating and trapping the Bohrok's Queens, the Bahrag. Relieved of their Krana, the Gahlok began to help rebuild the villages.

After adventures on the island of Voya Nui, the Toa Nuva returned to the deserted island of Mata Nui. Knowing the Bohrok's true purpose, the Toa Nuva reawakened the swarms. The Gahlok continued with their cleansing of Mata Nui, and met opposition only when they encountered Kardas. After subduing the creature, the Bohrok completed their task, and went back to hibernation, awaiting the time when they would be needed again.

The Gahlok are extremely adaptive Bohrok. Their strategies evolve quickly, changing as soon as a Matoran or Toa can figure them out, and they attack in unpredictable patterns. They do not strike in the same manner a second time, so as to keep their attacking methods impossible to figure out.

Gahlok are able to access elemental Water powers. As with all Bohrok, they are capable of rolling into balls for quick transport, and can snap their necks out for an offensive move or to launch its Krana onto another being and bringing them into the swarm's control.

Gahlok use Water Shields to channel their powers.

8562 Gahlok was released in early 2002 and contained forty pieces. A randomly chosen orange Krana was packaged with each set. By pushing down on the lever on the back of the Gahlok, the gears will cause its head to lunge forward. It is also able to roll up into a ball. An extra piece included in the set allowed the rolled-up Gahlok to hang from the lid inside the canister.

Gahlok can be combined with 8564 Lehvak and 8565 Kohrak to create the Bohrok Kaita Ja. Gahlok could also be combined with Lehvak alone to make the Ghekula model; instructions could be found in the May–June 2002 issue of LEGO Magazine.

"The treacherous Gahlok, masters of the flood tide..."
— Turaga Vakama, The Bohrok Awake