"If a Kane-Ra charges you, don't run! Unless you're wearing a Mask of Speed, you won't outrun it. Stand perfectly still, arms at your sides, and avoid looking the Rahi right in the eyes. If it decides you're not a threat, it may break off its charge before it gores or flattens you. If it doesn't, well, you won't be around to complain about the bad advice I gave you."
— Rahaga Pouks, Rahi Beasts

Kane-Ra, also known as the Bulls of Legends,[5] are extremely territorial bull-like Rahi.

Kane-Ra were originally created by the Makuta from a blend of Viruses in vats of Liquid Protodermis as part of their duty to populate the Matoran Universe with Rahi.[6]

On Metru Nui, Kane-Ra were usually seen roaming the lands of Po-Metru, their preferred habitat.[7] When Makuta Teridax caused the Great Cataclysm, the Kane-Ra, like many other Rahi, migrated to the island above, Mata Nui.[4] Some stayed during part of the Visorak occupation, and one herd was observed by Pouks and Onewa.[8] 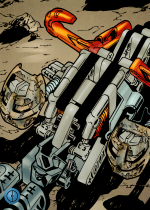 A Kane-Ra with Infected Kanohi.

The Kane-Ra on Mata Nui were soon infected with Infected Kanohi and organized into Teridax's army of Rahi. The Makuta often paired the bulls with Muaka, while these two very different Rahi would not work together under ordinary circumstances.[9] Teridax used the Kane-Ra to terrorize the Matoran for a thousand years, until the arrival of the Toa Mata. He then directed the Kane-Ra, along with Muaka, to attack the Toa in an attempt to defeat them. During a journey to meet the other Toa, Kopaka and Pohatu were attacked by a Kane-Ra in Ko-Wahi, but managed to trap it in a crevice and crush it with boulders.[10]

When the Toa Mata defeated Teridax, he released his hold over the Rahi, and they retreated, to roam around the valleys of Mata Nui as they had before the Makuta had infected them.[4]

The Kane-Ra of Mata Nui avoided the Bohrok to the best of their ability, but when the Toa Nuva released the insectoid robots intentionally, the Kane-Ra retreated back to Metru Nui.[11]

After the Great Spirit Robot was critically damaged in the Battle of Bara Magna, many Kane-Ra immigrated to Spherus Magna.[1]

In his lair in the Maze of Shadows, Teridax conducted many experiments on Rahi. Among other bizarre results, the experiments produced a Kane-Ra that had no legs, which was later encountered by the Toa Metru on their journey back to Metru Nui.[12]

Now a Dark Hunter, Charger was once a Kane-Ra, before he was transformed into a brutish humanoid.[13] 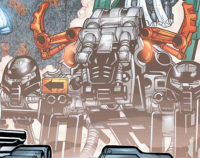 A Kane-Ra in the Comics.

Kane-Ra typically prefer to live as loners, becoming fiercely territorial over their grange. This, along with the short supply of vegetation in Po-Metru, kept Kane-Ra from behaving as herd animals. The bulls often travel alone, and on rare occasions by two or three, feeding on vegetation by day and searching for shelter in caves by night. Their sharp horns protect them from predators such as Muaka, and their territorial nature drives off other desert Rahi such as Nui-Jaga. Kane-Ra are normally not a threat to Matoran, but will attack if approached too close or too quickly.[7] Kane-Ra are brave and bold to the point of being unstoppable, even suicidal.[13] Kane-Ra herds will sometimes join with Kikanalo herds.[14]

Kane-Ra are bovine in appearance, with sharp, curving horns and a broad snout. They possess a tread-like appendage in place of hind legs. They are capable of extending their necks a great distance and use this ability to great effect as a defense mechanism.[15]

A Kane-Ra in set form.

8538 Muaka & Kane-ra was a boxed set released in the summer of 2001. It contained 647 pieces used to make a Kane-Ra and a Muaka. When either model's midsection was squeezed the head would jab forward as the mouth opened, then quickly closed. This was advertised as a way for the Kane-Ra to battle with a Muaka or with a Toa Mata set. The Muaka came with two Infected Kanohi Hau, while the Kane-Ra came with two black Noble Huna. The masks were attached to rods on the shoulders which when removed (as was intended to occur when a Muaka set grabbed the mask in its jaws) would cause the legs to fall off as if in injury. The Kane-Ra's instructional manual contained additional instructions to combine the parts of the two creatures and create a Kuma-Nui.

"It must be remembered that Kane-Ra are brave and bold to the point of being unstoppable and well near suicidal. Put a wall in front of them, they will go through it... Put a canyon before them, they will try to jump it..."
— The Shadowed One, Dark Hunters

A Matoran symbol depicting a Kane-Ra