"Ugly. What is worse than looking out your window to see a swarm of chittering, ravenous Kinloka headed your way? I'll tell you – still being in your dwelling when they get there."
— Rahaga Bomonga, Rahi Beasts 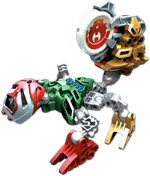 The Kinloka species was created by Makuta using Viruses and Liquid Protodermis[3] in an experiment by the Brotherhood to produce a Rahi with a more efficient digestive system.[2] The results were unexpected, instead creating nasty beasts similar to Stone Rats that devour anything in their path.[4]

A population of Kinloka settled on Metru Nui. Most resided near the Moto-Hub in Le-Metru, although some were seen near Ko-Metru and in Ta-Metru. At one point, these Kinloka accessed a vault of Kanoka. Over time, they learned how to use them, and now commonly use them for hunting. Their small shooting power and range are compensated by great accuracy. The Rahi are seen to use many different Kanoka, but they usually carry weaken disks to slow down opponents.[5][4] Mavrah once attempted an experiment with Kinloka in an Archives sub-level, but they broke free, causing great havoc.[6]

Kinloka were also known to live on Zakaz. There, the native Skakdi used them to set off any hidden traps when they moved around the island, creating the slang term "stalking Kinloka."[7]

After the Great Spirit Robot was critically damaged in the Battle of Bara Magna, many Kinloka left the Matoran Universe and immigrated to Spherus Magna.[1]

As a result of the experiments of the Brotherhood,[2] the Kinloka have an insatiable hunger, capable of eating even Matoran or structures.[4]

The Kinloka have natural Kanoka Launchers on their tails.

The Kinloka can be built out of the Matoran sets 8607 Nuhrii, 8610 Ahkmou, and 8611 Orkahm. Instructions for the Kinloka were included with the three sets. Its tail features a Kanoka Launcher.

Kinloka from BIONICLE: Maze of Shadows