"Small, winged creatures were indeed flitting all around the dragon. Now and then, one would let out a scream that shattered rock."
— Narrator, Federation of Fear

The Klakk species was created by Makuta Mutran using Viruses and Liquid Protodermis to be one of the Rahi to inhabit the Matoran Universe.[3]

When Makuta Krika and Spiriah imprisoned Makuta Miserix on Artidax, they stationed many Klakk on the island to keep him in place. As time passed, Miserix absorbed many of the Klakk to grow in size, until their sonic screams no longer harmed him. 79,100 years later, when Brutaka and his team arrived to free Miserix, they were attacked by the Klakk after cutting Miserix's chains. The Klakk were then defeated by Miserix's own power scream after he was set free.[4]

After the Great Spirit Robot was critically damaged in the Battle of Bara Magna, many Klakk left the Matoran Universe and immigrated to Spherus Magna.[1]

Mutran created one Klakk in Karda Nui to guard his equipment in the swamp after the Shadow Leech Hive was destroyed by Toa Ignika. The Klakk, however, attacked Vican and turned him back into a Le-Matoran, then escaped. Learning that a Klakk can restore a being's moral Light, Vican told Takanuva about it. He, accompanied by Vican, Tanma, Photok, Solek and Radiak, then sought the creature out to verify Vican's claim. Radiak attacked the Klakk, and it unleashed a sonic scream that returned his light.

Takanuva later used the Klakk to attack all the other Shadow Matoran and himself as well, healing all of them from their condition.[5] Shortly afterwards, the Klakk was killed by the Energy Storms.

Klakk have the ability to generate powerful sonic screams, strong enough to quell a Makuta. These screams can destroy the barrier that keeps light from naturally returning to a being. This nullifies the effects of Shadow Leeches, the Kanohi Avsa, and Gorast's stinger. 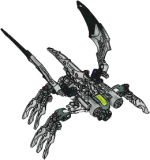 A Klakk in set form

The Klakk was exclusively released as a set in the September–October issue of the LEGO BrickMaster Magazine in 2008. The set contains thirty-eight pieces.