"The Mukau [sic] is a placid animal that lives in herds on the plains of Mata Nui. Although peaceful by nature, it is quick to react to danger. Opponents would be wise to beware the Mukau's [sic] horns and hooves, which it can wield with surprising speed!"
— LEGO Mania Magazine January-February 2002

The Mata Nui Cow species was created by the Makuta using Viruses and Liquid Protodermis to be one of the Rahi to inhabit the Matoran Universe.[3]

After the Great Cataclysm, the population of Cows that lived in Metru Nui migrated to the grassy plains found on the newly-formed island of Mata Nui, where they resided for 1,000 years.[4]

When the Toa Nuva intentionally unleashed the Bohrok, these Cows returned to Metru Nui.[5]

After the Great Spirit Robot was critically damaged in the Battle of Bara Magna, the surviving Mata Nui Cows left the Matoran Universe and immigrated to Spherus Magna.[1]

Though naturally gentle, the Mata Nui Cow becomes considerably more formidable when faced with danger, taking advantage of its sturdy horns and hooves which it quickly adopts as natural weapons.[4] 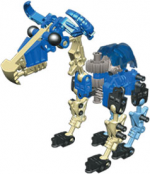 The 8531+8533 Mata Nui Cow can be built using parts from Toa Mata sets 8531 Pohatu and 8533 Gali. Spinning a gear on its back causes its front legs to alternately move back and forth. Instructions could be found in a 2002 LEGO Mania Magazine (now simply LEGO Magazine) or on the LEGO Club website.