"Instead, he saw the insect flailing away in the muddy waters, wings beating furiously. Then, to the Toa Nuva's shock, the Nui-Kopen started to transform. Tentacles sprouted from its sides, its wingspan expanded, and its tail transformed into a wickedly sharp, barbed stinger. When it flew again, it was as a vastly different creature than it had been just moments before."
— Narrator, Swamp of Secrets

The Pit Mutagen was a substance created by the combination of salt water from the Aqua Magna ocean with energy radiation emitted from sources within the Matoran Universe.

Passing by Aqua Magna, the Great Spirit Mata Nui fell into a coma, and crash landed on the ocean planet. The waters of the ocean were affected by the natural energy radiating from the engine of the robot, and turned mutagenic.[1] Large amounts of water containing Pit Mutagen leaked through the hole in the Southern Continent's dome, caused by Voya Nui breaking up through it, and into Karda Nui, where it created a swamp at the bottom. Prisoners attempting to escape from the Pit entered the waters, and were mutated. The Pit itself filled up with the mutagenic waters.[2][3] 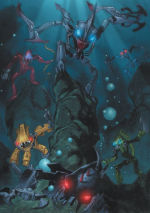 The landmass of Mahri Nui later broke off from Voya Nui, and fell into Aqua Magna. The Matoran there were affected by the mutagen, but were saved by bubbles of air forming a protective dome around the city. The mutagen had affected their bodies, undoing the alterations made to them by Karzahni.[4] However, it also damaged some of their weapons.[2][4]

In Karda Nui, numerous Rahi and three Makuta were mutated by the Pit Mutagen. The Makuta lost many of their powers and their ability to shapeshift, becoming locked in the insectoid forms they had taken for that mission, as well as being afflicted by a number of other mutations.[5]

After Mata Nui reunited Spherus Magna, he sent a wave of Life energy throughout the planet, which, among other things, partially cured the mutated beings residing in the ocean of Aqua Magna, while leaving them able to breathe water.[6]

In this alternate timeline, Pit Mutagen flooded into the domes of the destroyed Matoran Universe after Mata Nui's death, mutating any creatures that survived beyond recognition.[7]

The Pit Mutagen is diluted from a form of energy radiation naturally emitted by energy sources, such as the Codrex. The energy itself is invisible, and is ordinarily harmless. However, combined with the Black Water of Aqua Magna, the energy formed a mutagenic substance. The mutagen alters the physiology of those affected, frequently rendering them unable to breathe air.[2]

The mutagen has mutated the Matoran of Mahri Nui and the Barraki, among other beings. The level of the mutagen's saturation in the waters of the Pit increases with depth; higher up, brief visits will produce no change at all, midway down exposure for a minute or so causes drastic changes, and near the bottom of the Pit complete mutation occurs almost instantaneously.[citation needed] Several species are immune to the mutagen, such as Nocturn's species[8][9] and the Zyglak.[10][11] Pit Mutagen can also be damaging to Kanohi and weapons. Both the Ignika and Brutaka's Olmak have been damaged by it, as well as tools used by the Mahri Nui Matoran.[2]