"They are small creatures, but incredibly fierce and cunning... they shun bright light and use darkness and fear as weapons. Their nests are scattered throughout the Underworld, and woe betide the Miner who breaks through to one!"
— Onepu, Mata Nui Online Game

The Kofo-Jaga, also known as fire-scorpions,[3] are small scorpion Rahi.

The Kofo-Jaga species was created by the Makuta using Viruses and Liquid Protodermis to be one of the Rahi to inhabit the Matoran Universe.[4] 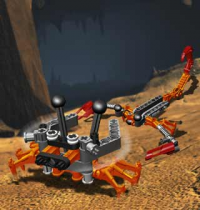 Following the Great Cataclysm, some of the Metru Nui Kofo-Jaga migrated to the newly-formed island of Mata Nui, where some were enslaved by Teridax.[6] When the Great Cataclysm caused Voya Nui to rocket upwards and land on the surface of Aqua Magna, its population of Kofo-Jaga survived the ascent.[5]

On Mata Nui, Kofo-Jaga were often found near the Mangai Volcano in Ta-Wahi.[2] Kofo-Jaga also migrated to Onu-Wahi.[7] An infected Kofo-Jaga guarded Toa Mata Pohatu's Toa Stone in Po-Wahi, but it was defeated by Takua.[6] Tahu was attacked by dozens of Kofo-Jaga while he was seeking a Kanohi Akaku.[8] Toa Nuva Onua used their love of lava and ferocious possessiveness to drive a pair of Manas away from a Kanohi Kaukau Nuva that he was seeking.[9]

Swarms of Kofo-Jaga were driven from their homes by the Bohrok swarms, causing trouble for the Onu-Koro Ussalry.[10] The Kofo-Jaga finally migrated back to Metru Nui when the Toa Nuva unleashed the Bohrok on the island.[11]

When the Toa Mahri destroyed the Cord and returned Voya Nui to its former position on the Southern Continent, its Kofo-Jaga population may not have survived the descent.[12]

After the Great Spirit Robot was critically damaged in the Battle of Bara Magna, many Kofo-Jaga left the Matoran Universe and immigrated to Spherus Magna.[1]

A Kofo-Jaga in the Voya Nui Online Game

Kofo-Jaga are attracted to heat and flame, and they thrived in the fires of Ta-Wahi.[2] They will only move if they smell lava or a similar heat source, and once they settle into an area, they will fiercely defend their territory.[9] Strangely, despite their love of heat and flame, they abhor light of any kind and prefer dark places; Matoran can easily ward off small numbers of them with a single Lightstone.[2] Kofo-Jaga are generally weak alone, but they can drive off a Manas in groups with their burning sting.[9] Kofo-Jaga are also very cunning and tend to ambush their opponents.[13] They are believed to be related to the larger Nui-Jaga.[citation needed]

A Kofo-Jaga from BIONICLE: Maze of Shadows

"Each was the size of a clenched fist and looked like a cross between a scorpion and a giant wingless firefly. Their deadly-looking pincers clamped open and shut rhythmically as they buzzed toward Tahu, their legs moving too fast to see."
— Narrator, Tale of the Toa