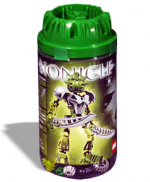 The Lewa Nuva set was released in summer 2002 as one of the six Toa Nuva sets. The set consists of thirty-eight pieces.[note 1]

In addition to the parts necessairy to build Lewa Nuva, the set included three ball pieces which were used in the combiner model Wairuha Nuva, built by combining pieces from Lewa Nuva with 8570 Gali Nuva and 8571 Kopaka Nuva.

Turning a gear in Lewa Nuva's back causes him to swing his Air Katana up and down. The set could be configured with both arms connected to the gear system, or with one arm being able to be rotated freely using an axle-pin. In the latter case, a left-over 3-length axle and small gear could be used to lock the gear function.

Unlike the other Toa Nuva, Lewa Nuva did not feature an alternate configuration for his weapons, but could be posed to hold his blades as wings for flying.