The Kikanalo species was created by the Makuta using Viruses and Liquid Protodermis to populate the Matoran Universe.[3]

Large herds of these creatures lived in Po-Metru on Metru Nui.[4] When the Assembler's Village would cease production for the day,[5] these herds would stampede through the district's plains and canyons, churning up pieces of Protodermis in the soil with their tusks. These pieces could be later salvaged by Po-Matoran Carvers, and therefore they valued the presence of Kikanalo near their encampments, despite the fact that the stampeding Rahi frequently destroyed villages.[6]

Kikanalo in Legends of Metru Nui

During the Toa Metru's mission to find and rescue Toa Mangai Lhikan, a stampeding herd of Kikanalo interrupted a conflict between the Toa and the Dark Hunters Nidhiki and Krekka. As Vakama and Matau took refuge from the oncoming herd, Nokama remained in the middle of the canyon and used her Kanohi Rau to communicate with its leader. Through that link, she and the other Toa Metru were able to cooperate with the Kikanalo, who offered to carry the Toa on their backs to the Prison of the Dark Hunters. When the Toa and Dark Hunters clashed again, the Kikanalo used their sonic roars to defeat the Vahki Zadakh stationed at the prison.[5]

The Metru Nui population of Kikanalo started to drop when the Visorak conquered the city following the Great Cataclysm, as the Kikanalo were too proud to run or hide from the spiders, preferring to challenge them instead. These clashes usually ended with the Kikanalo losing. During the invasion, Rahaga Pouks feared that the Kikanalo were mere months away from extinction.[4] The declining Kikanalo population led to Catapult Scorpions leaving Po-Metru in search of food.[7] By the time the Visorak invasion was over, Metru Nui's Kikanalo population was critically endangered.[4]

Some Kikanalo later migrated to Mata Nui.[2] They later returned to Metru Nui after Toa Takanuva's defeat of Makuta Teridax.[8]

After the Great Spirit Robot was critically damaged in the Battle of Bara Magna, many Kikanalo left the Matoran Universe and immigrated to Spherus Magna.[1]

During the Visorak occupation of Metru Nui, a group of Vohtarak surrounded and captured a Kikanalo. It was subsequently webbed up in a cocoon and then mutated by the Hordika Venom of the Visorak.[11] It is unknown if this Kikanalo is still alive.

Kikanalo are described as resembling something between kangaroos and elephants.[6] Despite the fact that Kikanalo appear frightening, they are usually gentle Rahi.[12] While they were once dismissed as dumb beasts, it was accepted that the Kikanalo are actually quite intelligent after Nokama communicated with these Rahi. They are proud and territorial, which unfortunately became their undoing during the Visorak occupation of Metru Nui.[4] They are the only type of Rahi that are not considered enemies of Catapult Scorpions, as the scorpions eat the Protodermis the Kikanalo dig up.[7] Kikanalo herds will sometimes join with Kane-Ra herds.[13]

The Kikanalo are more than capable of defending themselves. Stampeding over foes is a common defense as well as jumping high up in the air and landing on the enemy's head. If the Kikanalo are still pursued, they are able to unleash a powerful sonic roar that can blow enemies away,[4] though it can be used for other purposes. For example, they used this to seal off the Toa Metru's path so that Nidhiki and Krekka could not follow them.[12] 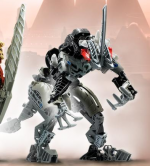 A Kikanalo in set form

A Kikanalo was paired with Toa Mangai Lhikan in the 8811 Lhikan & Kikanalo set. Though sold together, Lhikan was actually never seen using one as a mount in the storyline. The Kikanalo used 170 of the total 214 pieces.