"The first thing to remember about Tarakava is that even if you can't see them, they are always there. "
— Rahaga Gaaki, Rahi Beasts

The Tarakava are reptilian sea creatures that hunt in pairs and live near water regions.

The Tarakava species was created by the Makuta using Viruses and Liquid Protodermis to be one of the Rahi to inhabit the Matoran Universe.[3]

A blue Tarakava, as seen in the Mata Nui Online Game.

On Metru Nui, Tarakava patrolled the shallow waters around Ga-Metru, occasionally spotted along the coastline in other parts of Metru Nui.[4] They normally spent their time hunting fish to their pleasure.[citation needed] They preferred to hunt seabirds and large Rahi who came to the water to drink, but they were also known to attack Matoran.[4]

After Teridax caused the Great Cataclysm, the undersea Tarakava nests were disturbed, making these Rahi even more dangerous.[4] Many Tarakava fled to the island of Mata Nui, where they were soon placed under the control of Teridax through his infected masks.[5] He used them to prevent the Matoran of Ga-Koro from constructing their huts.[MNOG, Ch. 3]

Tarakava also lived in the waters around Mahri Nui. When a Matoran scientist tested his prototype transport, it propelled him into the arms of a Tarakava. Afterwards, the design was abandoned as a form of transport.[6]

Soon after Gali arrived on Mata Nui, she was attacked by an infected Tarakava, but she escaped using her power over Water. [7]

An infected male Tarakava sunk one of the huts in Ga-Koro, trapping many of the Matoran and Turaga Nokama inside. Macku escaped and sought help from Takua, who managed to raise the hut. The Tarakava attacked the village, but was defeated by Gali, who removed his infected mask. Without Teridax's influence, the creature was much more docile, and was nursed back to health by Kotu.[MNOG, Ch. 3]

While Gali was exploring the waters of Mata Nui, another infected Tarakava attacked her. She managed to trick the Tarakava into a cave and then covered the entrance with rocks to block its exit. After Gali had retrieved her Miru from the cliffs, more Tarakava attacked her, in conjunction with Nui-Jaga.[C2] Tahu dispatched the scorpions, while Gali took on the lizards. One Tarakava downed her with its powerful limbs, and she landed in the water. These Tarakava fled while Tahu rescued Gali. Teridax later marshaled several Tarakava to attack the Toa Mata during their meeting, but these were defeated by Tahu and Pohatu.[C3] 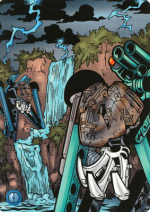 Later, while the Toa Mata were underground, attempting to reach Teridax, Tarakava assaulted Kini-Nui along with other Rahi. These were repelled by the Matoran military, and eventually retreated.[MNOG, Ch. 9] Teridax released his hold over them after his defeat, and the Tarakava returned to the waters around Ga-Wahi.[citation needed]

The Tarakava did their best to avoid the Bohrok, and later retreated back to Metru Nui when the Toa Nuva released the Bohrok to do their job.[citation needed]

After the Great Spirit Robot was critically damaged in the Battle of Bara Magna, many Tarakava left the Matoran Universe and immigrated to Spherus Magna.[1]

A mutated, easily angered Tarakava with two heads was created by the Energized Protodermis Entity.[8] It was first discovered when it attacked a Ga-Matoran fishing boat. The Ga-Matoran escaped, but the two-headed Tarakava left only splinters of the boat.[9] The Tarakava was captured and housed in the Metru Nui Archives, where it was placed in a holding tank on a sub-level, because it is immune to stasis.[10]

About 1,001 years ago, Toa Metru Nuju ignored Whenua's advice and entered the Tarakava's cell in the Archives, seeking the Great Disk of Onu-Metru. Nuju tapped the glass, and the Tarakava tried to attack him, cracking the inner layer of glass in the tank. Whenua found Nuju, chastised him for annoying the beast, and both of them left the angry Tarakava alone.[11] 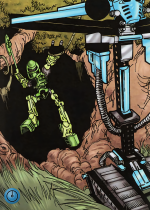 The Tarakava Nui, also known as the King of Lizards,[12] was a mutated Tarakava created by Teridax.[13]

Prior to his attempted take-over of Metru Nui, Teridax created the Tarakava Nui with the help of the Energized Protodermis Entity. When the Matoran traveled to Mata Nui, the Tarakava Nui followed, and seriously impeded efforts to build Ga-Koro, until the Ga-Matoran and Turaga Nokama finally drove it off.[13]

1,000 years later, the Tarakava Nui was forced to return to Metru Nui when the Bohrok were released by the Toa Nuva.[citation needed]

After the Battle of Bara Magna, it left the Matoran Universe and immigrated to Spherus Magna.[1]

Tarakava mainly hunt in pairs. A Tarakava's primary hunting method is to lurk just below the water, stalking their prey, and then stun their victim with blows from their powerful forelimbs. Tarakava can stay underwater for long periods of time and are powerful enough to capsize large watercraft. Tarakava generally stay in shallow waters and avoid deep water, where their natural predators such as Takea can be found. Tarakava also rely on the element of surprise to ambush their prey, so a Tarakava is most vulnerable if it misses its target after surfacing.[4]

8549 Tarakava was a boxed set released in the summer of 2001. The set contained 411 parts used to create two Tarakava, one blue and one teal. On each Tarakava's back two levers could be found, with which one could make the Tarakava model punch with its corresponding fist. This was advertised as a means for the Tarakava to battle each other or a Toa Mata set. When a Tarakava's mask was knocked off by another figure, its jaw would go limp and drop as if in injury. The two Tarakava could be combined to form a Tarakava Nui, the instructions for which could be found in the back of the instruction booklet of the teal Rahi.

A prototype set form was revealed for a subspecies, the Sand Tarakava.[14] This was to be packaged with the teal Tarakava in place of the blue one. This set was never produced for sale, though five were created and purchased by LEGO collectors.[citation needed]

"But we have rules here too — like don't annoy the two-headed Tarakava, if at all possible."
"It does seem... excitable."
"Last ones to excite it before it came here were two Ga-Matoran in a fishing skiff. They were lucky to make it out of the sea. The skiff wound up as sawdust."
— Whenua and Nuju, Trial by Fire 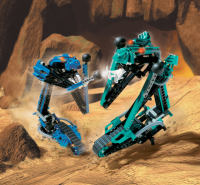 The Tarakava in set form.