Set 1393 Matoro was a promotional set released in September 2001 portraying Matoro. It specifically portrays him as he appeared after his diminishment from being inside a Matoran Sphere. 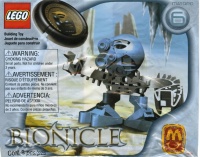 The set was also given away for free in C1000 supermarkets in Holland during 2003 with the same set number, alongside eleven other sets.[1] This version of the polybag lacked the McDonald's branding, and the instructions advertised the Rahkshi.

Matoro's arms can be pulled back and released, making them shoot back forward. His right hand is capable of holding a Bamboo Disk, and doing this while he is holding the disk causes him to throw it.