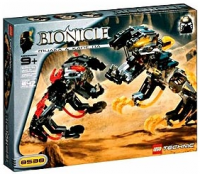 One Muaka and one Kane-Ra are built from the set. While structurally similar, they are two different creatures and so have different details. The tiger-like Muaka is yellow, and has ear-like structures on its head and claws on its feet. The bull-like Kane-Ra is red, and has horns on its head and hoof-like feet.

An alternate model for the set also exists, depicting a Kuma-Nui, which could be built with instructions included in the Kane-Ra's instruction manual.

Squeezing the midsection of either Muaka or Kane-Ra causes their necks to extend, shooting their heads forward and snapping their jaws. This function is meant for grabbing the mask off of an opponent. Removing their masks and the rods they are attached to causes the Rahi's legs to fall off in injury. The sets feature treads instead of hind legs.

8538 Muaka & Kane-Ra scored a total of 88 on Brick Insights, indicating generally positive reviews. The set was praised for its action feature and complex build