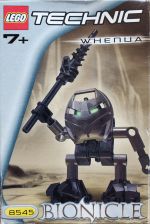 The Whenua set was released in 2001 as one of the six Turaga sets. The set consists of twenty-nine pieces.

A lever is present on Whenua's back, connected to his right arm, so lowering it causes him to lift his Drill of Onua. The arm is automatically lowered due to a rubber band connecting the lever to his neck.