Set 1391 Jala was a promotional set released in September 2001 portraying Jaller, who was then known as Jala. It specifically portrays him as he appeared after his diminishment from being inside a Matoran Sphere. 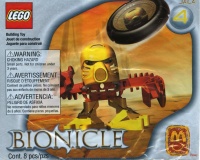 Jala's arms can be pulled back and released, making them shoot back forward. His right hand is capable of holding a Bamboo Disk, and doing this while he is holding the disk causes him to throw it. The disk could also be stored on his back.