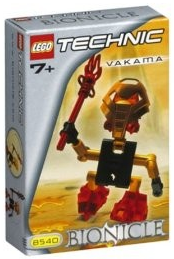 The Vakama set was released in 2001 as one of the six Turaga sets. The set consists of twenty-nine pieces.

An identical promotional set, 1417 Vakama, was released with Kabaya candy in Japan in 2001 as one of four Turaga. 1417 Vakama was also released as a polybag by Woolworth's in the United Kingdom during 2003, as part of set 4228383.

By combining pieces from Vakama with 8541 Matau, 8542 Onewa, 8543 Nokama, 8544 Nuju, and 8545 Whenua, one can build a Turaga Nui, though official instructions were never released. The Kabaya version of Vakama was also advertised as combining with 1418 Matau, 1419 Nokama, and 1420 Nuju to create one of three possible combiners. Only one of these combiners has instructions provided.

A lever is present on Vakama's back, connected to his right arm, so lowering it causes him to lift his Firestaff. The arm is automatically lowered due to a rubber band connecting the lever to his neck.

Across its two iterations (8540 and 1417), Vakama scored a total average of 59 on Brick Insights, indicating poor reviews.