Set 8549 Tarakava is a large boxed set released in 2001, portraying the Tarakava. 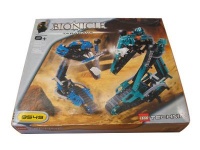 The Tarakava set was released in 2001 as one of the five Rahi sets. The set consists of 409 pieces.

Two Tarakava are built from the set. One is blue, and the other is teal.

An alternate model for the set also exists, depicting a Tarakava Nui, for which instructions were provided in the teal model's booklet.

Each Tarakava has two levers on their back. Pushing down a lever causes its corresponding arm to punch forward. When a Tarakava's mask was knocked off, its jaw would go limp, as if in injury.