Set 1389 Onepu was a promotional set released in September 2001 portraying Onepu. It specifically portrays him as he appeared after his diminishment from being inside a Matoran Sphere. 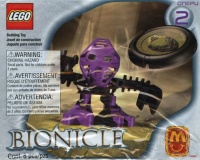 Onepu's arms can be pulled back and released, making them shoot back forward. His right hand is capable of holding a Bamboo Disk, and doing this while he is holding the disk causes him to throw it.

1389 Onepu scored a 64 on Brick Insights, indicating poor reviews. However, consumer reviews contributing to this set's score discuss the aftermarket price, which was not a factor in the original set's release.