"Peaceful types they may be, but let Nui-Rama threaten their nests, and you'll see what sort of fighters they are!"
— Rahaga Kualus, BIONICLE: Rahi Beasts

The main four-winged Gukko species, along with its sub-species the vulture-like Kewa and the hawk-like Kahu,[4] were all created by the Makuta using Viruses and Liquid Protodermis to be some of the Rahi to inhabit the Matoran Universe.[5]

On Metru Nui, the birds generally prefer to make nests in a mess of cables in Le-Metru. They usually travel in small groups in search of upward air streams so that they can glide further. These Rahi can spend most of the day flying, keeping an eye out for predators. The high flight speed of the Gukko has an unfortunate tendency to attract the speed-crazed Phase Dragon.[6] They also tend to get caught in the strong webbing of Silver Chute Spiders, resulting in their becoming the spider Rahi's main prey.[7]

Initially, Gukko were believed to be untamable by the Matoran. As a Matoran, Matau periodically attempted to ride the Gukko as a means of transportation, each time unsuccessfully.[6]

After the Great Cataclysm, many of the Gukko migrated to the newly-formed island of Mata Nui and settled in the jungle-covered Le-Wahi region.[1] During the events of the Great Rescue, the Gukko were finally tamed and ridden by Rahaga Kualus and Toa Hordika Nuju.[8]

The Le-Matoran of Mata Nui continued this tradition when they tamed the Gukko to be used as mounts in the Military Gukko Force[9] and sometimes had Bamboo Disk launchers strapped to their backs.[10] These Gukko migrated back to Metru Nui with the Matoran after 1,000 years of residence on Mata Nui.[11]

After the Great Spirit Robot was critically damaged in the Battle of Bara Magna, many Gukko emigrated from the Matoran Universe to Spherus Magna.[12]

When Toa Nuva Lewa was robbed of his Elemental Powers by the Nuhvok-Kal[15] and Gahlok-Kal, it was Kongu, riding Ka, who saved him as he fell from the canopy of Le-Wahi.[13]

Ka[3][citation needed: validate?] assisted Takua and Jaller during their quest to find the seventh Toa, transporting them through the trees of Le-Wahi.[16][17] When the population of Mata Nui returned to Metru Nui, Ka was taken with them.[18] Ka also immigrated to Spherus Magna with the Matoran.[19][20]

The Gukko is perceived to be a very beautiful creature by the Matoran, with a long graceful body and four slender wings.[6] There exist two known subspecies; the Kahu and the Kewa.[4] Gukko[16][17] and Kahu can both accommodate two riders, while Kewa are noticeably smaller and can only carry one rider.[10] The Rahi Taku, smaller still, is closely related to the Kewa.[21]

Despite being known as peaceful creatures, Gukko are infamously difficult to train. The Le-Matoran tried for many centuries to ride the Rahi with no success.[6] However, once they eventually were trained in Le-Koro, they were brave and loyal steeds.[1] They are also known to effectively defend their nests from the dangerous Nui-Rama.[6] 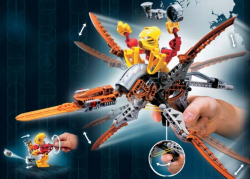 The set function of the Gukko

8594 Jaller & Gukko, portraying Ka[3], was released in late 2003. A trigger on its lower body allowed one to flap this Gukko's four wings. Also, four pins on its back acted as seats for up to two rebuilt Matoran sets. The Jaller and Gukko set's 221 pieces could be combined with pieces from 8595 Takua & Pewku and 8593 Makuta to create Makuta Nui.