Set 8593 Makuta is a large boxed set released in late 2003, portraying the Makuta Teridax, under the name "Makuta". 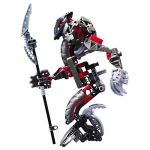 A side view of the set

The Makuta set contains 199 pieces, and was first released in the fourth quarter of 2003.

By combining pieces from Makuta with 8594 Jaller & Gukko and 8595 Takua & Pewku, one can build the Makuta Nui combiner model, which represents a monstrous form Teridax takes to inject fear into the hearts of enemies. Makuta could also be combined with 8596 Takanuva to build the Takutanuva model. The Makuta set was later included in the bundled set 3287 Takutanuva, as well as the special edition 10201 Takutanuva, the latter of which included a special Movie Edition Kraahkan.

By spinning an axle on Makuta's back one could cause his entire upper torso to swing left or right.

Makuta wears a metallic black Kanohi Kraahkan. Two silver Kanohi Avohkii are included within the set, used as a part of Makuta's hands.

Due to production changes, some copies of the set feature a Kraahkan that had four holes instead of the original six.

8593 Makuta scored a total of 79 on Brick Insights, indicating generally positive reviews. The set received an overall positive review from BZPower's then-admin and co-owner Kelly McKiernan (later the webmaster for BIONICLE.com and HeroFactory.com). Kelly gave the set a 7/10, praising the imposing look created by the final product, but criticizing the build process as being inelegant, especially compared to other large 2003 sets.