"The temper of the Ta-Koro Matoran boils as swiftly as the great Mangai in whose shadow we live."
— Turaga Vakama, Mata Nui Online Game

The Mangai Volcano was an active volcano at the center of the island of Mata Nui. 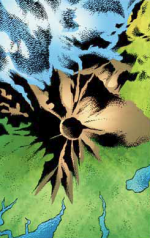 The Mangai Volcano in the Comics

The Mangai Volcano came into being when the Great Spirit Mata Nui's camouflage system was accidentally activated during the Great Cataclysm, creating the island of Mata Nui. It was situated directly above the Mangaia lair of Makuta Teridax in the ceiling of Metru Nui's dome.

When the Toa Metru traveled to the island to find a refuge for the Matoran of Metru Nui, Vakama journeyed to Ta-Wahi and discovered the volcano. Deciding that he would establish the village of Ta-Koro near the volcano, he felt that it was a protector of his village, similar to how the Toa Mangai protected Metru Nui. In Lhikan and his fellow Toa Mangai's honor, he named the volcano the Mangai. Later, Turaga Vakama led the Ta-Matoran construction efforts of Ta-Koro near the volcano in the Lake of Fire.

After the arrival of the Toa Mata, Teridax once used the volcano to attack the Toa, causing an eruption and subsequent lava flow which headed right towards the Toa. It was redirected with the speedy creation of a trench by Onua with the help of Lewa's Kanohi Kakama.

Following the Matoran's return to Metru Nui, the volcano was cleared by the reawakened Bohrok swarms. The remaining section was split apart when the Great Spirit awoke and burst through the island, destroying it. 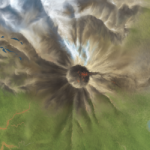 The Mangai Volcano viewed from above