"A secretive, powerful and dangerous group of renegades who have turned against the Great Spirit Mata Nui."
— Encyclopedia Updated

The Brotherhood of Makuta was a powerful faction of Makuta organized by the Great Spirit Mata Nui, tasked with carrying out his will and maintaining order in the Matoran Universe. Later, its members purged their inner light, and the Brotherhood became a malevolent organization.

The Brotherhood was created early on in the history of the Matoran Universe by Mata Nui. Led by Makuta Miserix, with their headquarters on the island of Destral, the initial purpose of the Brotherhood was to create biomechanical Rahi which would populate the Matoran Universe along with the universe's sapient species. However, they soon took on the tasks of settling major disputes and protecting the Matoran. On one such mission, Icarax and Mutran convinced the Vortixx of Xia to stop overcharging traders for their goods. As a side effect of this mission, a good portion of Xia was destroyed, and Mutran accidentally left the Mountain in the middle of the island.[TMC, Ch. 1] 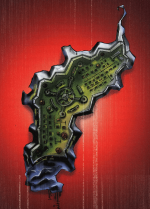 Destral, base of the Brotherhood of Makuta

The Barraki, leaders of the League of Six Kingdoms, claimed divine right as Mata Nui's chosen leaders, and demanded that the Brotherhood, as fellow followers of Mata Nui, use their talents to create war beasts for their armies. The Brotherhood complied, but kept a close watch on the League. When the League attempted to usurp Mata Nui himself, an army led by Miserix's lieutenant, Teridax, struck swiftly and brutally, ending the League for good. However, after defeating the Barraki, Teridax began contemplating the possibility of Mata Nui being overthrown.[1]

Shortly after the end of the League, the Matoran Civil War broke out in Metru Nui, weakening Mata Nui and causing the Great Disruption. During the war, Mutran was assigned to meet with Tren Krom, who probed the Makuta's mind, inadvertently giving Mutran knowledge into the inner workings of the universe. Teridax ended the civil war with the Archives Massacre, and Miserix decided to assign the Makuta to look over different regions and prevent such wars from occurring in future.[TMC, Ch. 4]

Some Makuta grew disillusioned with their jobs; their work was being ignored while Mata Nui received all the praise. Teridax, bolstered by information Mutran had gained, proposed a plan to undermine Mata Nui and become rulers of the universe. Some, including Miserix, were doubtful that the plan would succeed, but many more supported it and followed Teridax as the Brotherhood's new leader. Those who sided with Miserix were executed by Icarax and Gorast, though Krika showed mercy to Miserix himself and instead imprisoned him on Artidax.[TMC, Ch. 6] The Brotherhood publicly claimed that Miserix had died in a Rahi creation accident.[2]

The Brotherhood's first major act of treason was a raid on the island of Artakha, led by Makuta Kojol, to steal the Avohkii, the Mask of Light. Activities since then went unpublicized to maintain a reputation as guardians in many corners of the world.

Some time later, all involved in the raid on Artakha were assassinated by the Order of Mata Nui, including Makuta Kojol, who was killed on Xia. The Brotherhood completely lost the knowledge of the whereabouts of Artakha, and was never again able to find it.[TMC, Ch. 8] 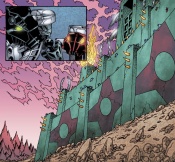 Around 3,000 years ago, the Dark Hunters stole the Makoki Stone from several Toa guarding it. The Shadowed One broke the Makoki Stone into six pieces, and auctioned it off. Seeing a potential use for the stones, the Brotherhood of Makuta outbid the competition, and acquired the pieces.[4]

Eventually, Teridax's Toa Hagah bodyguards found the Avohkii and realized the implications, deciding to defect from the Brotherhood and take the Avohkii with them, though Roodaka mutated them into Rahaga before they fled.[C25] This discovery prompted Teridax to accelerate his plans and infect Mata Nui with a virus that would ultimately render him catatonic.[citation needed: BA10?]

Shortly before Mata Nui fell asleep, the Brotherhood began a covert genocide against all Toa of Iron and Magnetism, afraid of the Toa's potential to damage their armor.[OGDi: May 16 2008, 02:37 PM] At least one Makuta was killed by a Toa of Iron, Zaria, in revenge for his fallen comrades.[TYQ, Ch. 1]

When the Great Cataclysm struck, wrecking Destral in the process, Teridax attempted to establish command over the Matoran of Metru Nui, but the Toa Metru trapped him in a Toa Seal and evacuated several of the Matoran to an island outside the universe.[5] At Teridax's order, Roodaka and Sidorak led the Visorak to occupy Metru Nui and free Teridax. However, the same Toa, now Toa Hordika, allied with the Rahaga and Keetongu to oppose the Visorak. In one great battle, Teridax was freed, but Sidorak was killed and the horde was scattered by Vakama.[6] The Toa then evacuated the rest of the Matoran to the new island, and after a conflict for the Vahi, won a pledge from Teridax not to menace the Matoran for a full year. Matters were complicated by a war with the Dark Hunters, provoked by Teridax's killing of Nidhiki and Krekka and his defeat of the Shadowed One.[7] During the war, a Dark Hunter named Zaktan discovered the Brotherhood's entire master plan recorded in a forlorn fortress.[4]

When Karda Nui was discovered by Vultraz, a Brotherhood spy, Teridax sent a strike force led by Antroz to invade Karda Nui and secure it for the Brotherhood.[TMC, Ch. 10] Due to the discovery of Karda Nui, the Brotherhood anchored Destral near the Southern Continent.[citation needed]

War with the Order of Mata Nui

Shortly after, the Order of Mata Nui revealed itself and attacked the Brotherhood, with the help of the Dark Hunters,[DID] Skakdi, and even four of the Barraki.[DW] The Brotherhood was taken by surprise, and lost their footing in much of the universe, although they managed to keep a resistance up. They lost Xia to the Dark Hunters, but managed to invade Nynrah.[DW, Ch. 4] The Brotherhood also placed an army of Rahkshi on the Southern Islands to stage an invasion of the Southern Continent, but they were repelled by an army of Skakdi.[DW, Ch. 4] Shortly later, Pridak captured the same fortress that detailed the Brotherhood's plan.[DW, Ch. 5]

Destral soon came under siege by the Order of Mata Nui. Tridax, who was in command of Destral, had been ordered to teleport the island to Metru Nui and besiege that city if attacked. Instead, he planned to release his Shadow Takanuva army, but was stopped by Tobduk and Mazeka.[DW] After a short struggle, Tridax was killed by Tobduk, and Destral was leveled by the Order's forces.[BIA, Ch. 6]

Some time later, the Brotherhood's forces fought a long and fierce battle with the Order on the island of Nynrah that ended in defeat.[DW, Ch. 7] The Toa Mahri led the Visorak horde to Artidax, where the horde was destroyed in a volcanic eruption arranged by the Order of Mata Nui.[DID, Ch. 6]

The Brotherhood received word from spies on Stelt that the Order was turning the Great Furnace of Ta-Metru into a virus factory that would produce the same virus that killed Makuta Kojol. However, this was a lie spread by the Order of Mata Nui to lure the Brotherhood into a final battle in Metru Nui, which they had been fortifying.[DID, Ch. 8] In response, the Brotherhood sent a massive war fleet of Rahkshi and ships. The Brotherhood forces managed to breach the city through a hole that had been made earlier by Voporak. The Brotherhood was nearing victory before Toa Krakua awakened the Bohrok below Metru Nui, who impeded the Rahkshi. While distracted by the Bohrok, Rahkshi were picked off by Order members and the Toa.[DW, Ch. 9]

Around this time, the eight Makuta sent to Karda Nui battled the Toa Nuva and allowed them to awaken Mata Nui. Icarax and Krika were killed by Gorast after betraying the plan, while the rest of the Makuta were destroyed by the Energy Storms, which Teridax had not told them about. The Great Spirit Mata Nui awoke, but his body was taken over by Teridax.[8]

The Toa managed to escape on the three vehicles they found in the Codrex, returning to Metru Nui in time to give aid to the city. The Order and Toa overpowered the Brotherhood before a sudden storm erupted, created by Teridax himself, destroying the retreating Brotherhood fleet.[DW, Ch. 9]

During the victory celebration in Metru Nui, Teridax revealed that he now occupied Mata Nui's body and was now the Matoran Universe.[8] After Teridax took control of the Matoran Universe, he put several surviving Makuta to work spawning thousands of Kraata, and then killed them.[RoS, Ch. 4] With all Makuta but Miserix and Teridax slain, the Brotherhood was effectively disbanded.

In this alternate universe, the Brotherhood was hunted down by the Toa Empire led by Toa Mangai Tuyet and mostly eradicated before the Makuta could make their move against Mata Nui. A few members, including Teridax, Kojol, and Krika, were still alive at the time of the arrival of the Takanuva from the prime reality. Surviving members participated in the Rebellion Against the Toa Empire.[DM] 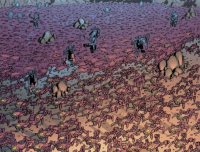 A large part of the Brotherhood's army was comprised of a branch known as the Visorak Horde. The Visorak were vicious spider Rahi created by Makuta Chirox, later conquered by Gorast[18] using the Heart of the Visorak.[19] Commanded by its king, Sidorak, and his Viceroy, Roodaka, the Visorak Horde conquered many lands and mutated many creatures and beings with their venom. The Horde was disbanded in Metru Nui after the death of Sidorak and the defeat of Roodaka,[20] but was eventually reformed by the Brotherhood.[4]

The Visorak were the main part of the Horde; seven breeds of spiders, each with their own unique abilities and powers. The Visorak were rendered extinct during the Order of Mata Nui/Brotherhood of Makuta War,[DID, Ch. 6] but Teridax recreated the species and used them as servants prior to his death.[11]

The Horde employed or enslaved a number of Rahi allies for assistance, who would travel with the Horde during their conquests.

The insignia of the Brotherhood

The core of the Brotherhood was comprised of the 100[9] members of the Makuta species, a number that was drastically reduced over the years, and after unloyal members were purged from it. The Makuta also employed a number of servants and slaves, including Toa, Rahi, and various other beings. They had a single leader, originally Miserix, who was usurped when Teridax implemented his master plan to take over the universe.[TMC]

The original purpose of the Makuta was to create various Rahi for the Matoran Universe. The process involves the use of Viruses, which give the new Rahi certain attributes. These viruses are then mixed with liquid Protodermis to create the Rahi. The viruses can also be used to offer special temporary traits to any being. Most Makuta were successful at Rahi creation, and specialized in many fields, though some, such as Spiriah, were not very good at it. Not all Rahi in the universe were created by Makuta, as some were made by the Great Beings before their departure from the universe.

Known Rahi and their creators are listed below: