"He eventually broke enough opponents in two to attract the attention of one of my Dark Hunters and was recruited to join the organization."
— The Shadowed One, Dark Hunters

Krekka was a powerful, albeit unintelligent member of the Steltian bruiser species and a Dark Hunter.

Krekka originally worked on Stelt, and was assigned to be a guard, as his species were of one of the land's lowest classes. His job was to convince intruders to go away from whatever place he was posted at, often through very painful means. This continued until he tried to turn away Makuta Gorast, sending her through a wall and starting a fight between the two, which resulted in the loss of his right eye. Krekka lost the fight and his job, and eventually left the island of Stelt.[1][2][3][4]

He journeyed from island to island, often getting into bad situations due to his stupidity, but able to get out of them due to his massive strength. This attracted the attention of the Dark Hunters, and they recruited Krekka.[2]

Krekka as he appeared in Legends of Metru Nui

During his time as a Hunter, Krekka was part of a team trained by Nidhiki, a Toa who had recently joined, for a mission. Nidhiki was ready to pass them all except Krekka, whom he thought of as too stupid. However, the Shadowed One did not trust Nidhiki due to his history as a traitor, and assigned Krekka as his partner, something the former Toa was displeased with.

Krekka, Nidhiki and Lariska were assigned to search for and bring to the Shadowed One a mysterious prototype launcher. They succeeded in stealing the items, though Nidhiki wanted to keep two for himself, and offered one to Krekka as a bribe. Krekka insisted that they give all three to the Shadowed One, and his loud refusal attracted the attention of the local residents, and he and Nidhiki made a hasty escape.[5]

Some time later, Krekka and Nidhiki were hired to guard the Kanohi Avohkii on Destral, but the mask was stolen by the Toa Hagah. When Norik and Iruini came back for the other four Toa Hagah that were later captured, Krekka attempted to stop Iruini, but was defeated by the Toa.[6] For their failure, the Brotherhood ordered their execution, but the Shadowed One refused to grant their request.[7]

Krekka, Nidhiki, and a third Dark Hunter, Eliminator, were hired by Teridax to kill the Toa Mangai, Nidhiki's former Toa team. They eventually succeeded in killing off all of the Toa except for Lhikan and then headed into Metru Nui to dispose of him. They captured him after he created Toa Stones for the Toa Metru, and imprisoned him in Po-Metru.[8] They later returned to the Coliseum, and followed Vakama, Nokama, and Matau when the three escaped. They traveled to Le-Metru to find the three Toa Metru in an Airship in battle with a squad of Vahki Nuurakh, and joined in. Krekka froze Vakama with a freezing Kanoka disk, but was eventually struck with a teleportation Kanoka, and reappeared outside the airship.[9]

After Nidhiki found him again, they discovered that the three Toa were traveling through use of Chutes, and traveled to a Chute Station at the edge of Le-Metru in order to threaten Kongu, the attendant, into reversing the flow of the Chutes. They succeeded, but the Toa escaped in time.[8]

Krekka and Nidhiki located the three Toa in an abandoned Po-Metru Assembler's Village, and began fighting them. The battle was interrupted by the onset of a Kikanalo rampage, and Krekka attempted to climb an abandoned sculpture to safety. One of its support beams was snapped by a Kikanalo rampaging past, causing the support beam with him still on it to fall and crush Nidhiki, stunning the two temporarily while the Toa fled again.[8]

The duo found the Toa in the Canyon of Unending Whispers, where Matau used the Shapeshifting power of his Kanohi Mahiki to trick Krekka into attacking Nidhiki. When the Toa found the entrance to Lhikan's prison, the Kikanalo sealed the entry so Krekka and Nidhiki could not follow.[8]

During the Great Cataclysm, the two Dark Hunters found the six Toa Metru escaping the Coliseum in a Vahki Transport with six Matoran Spheres on board. The Dark Hunters boarded the craft, and Krekka distracted Matau from driving while Nidhiki tried to attack Lhikan. Onewa used his mask power to control Krekka, having him grab Nidhiki and jump off the ship. Teridax, who was absorbing energy in order to complete his transformation, grabbed the two in a Shadow Hand, and killed them by absorbing their essences.[8] This fate prevented Krekka's revival aboard the Red Star.

Krekka was known for his sheer, raw power and brute strength, which inspired terror in many of his opponents, though he was very bulky, and lacked speed and agility. He was also extremely stupid, a trait which was kept in check by more intelligent beings such as Nidhiki. His stupidity resulted in a deep loyalty to the Shadowed One. Despite his low intelligence, he was a veteran of many battles, and knew how to use his power to his advantage.

Krekka was able to conjure handcuffs made out of energy.[10][11] He also had the ability to fly, though was known to forget that he could.

Krekka could hurl Kanoka from his Kanoka Launcher. He also carried a device which allowed him to launch energy webs. 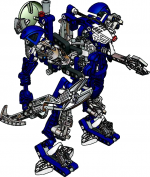 Krekka was released as a large boxed set in the summer of 2004. He contained 214 pieces, including a Po-Metru Kanoka Disk and Matoran Kanoka Launcher. Spinning an axle on his back caused him to turn his head to the left or to the right, and a lever on his back raised or lowered his Kanoka Launcher. Krekka's parts could be combined with those of the "Nidhiki" and "Turaga Dume and Nivawk" using with instructions found in the back of each set's instruction booklet to build Ultimate Dume, Teridax's form in the climax of the 2004 story. Krekka's parts were also included in the Toys "R" Us-exclusive special edition Ultimate Dume set alongside those of the other components. 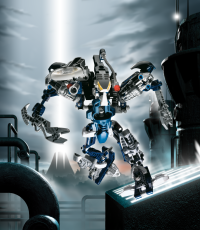 Krekka as a set

"Krekka! You just woke up every Toa for kios around. A Toa of Fire has spotted your team and you're about to be the guest of honor at a Dark Hunter bake. What are you going to do?"
"Smash him?"
— Nidhiki and Krekka, Birth of a Dark Hunter

"Smash the Toa of Fire into fragments. I will deal with Nokama."
"Fun."
— Nidhiki and Krekka, Struggle in the Sky

"You took shiny mask! Give it back!"
— Krekka to Toa Hagah Norik and Iruini, Birth of the Rahaga