"No, I don't need to kill you now. I've beaten you. Every breath you take from now on is only because I allow it. No matter where you go, who you fight, how many battles you win - you'll know you're only walking, talking, living because of me."
— Vultraz to Mazeka, Brothers In Arms

Vultraz was a malevolent Ta-Matoran from the Tren Krom Peninsula. He later became a Shadow Matoran who worked for the Brotherhood of Makuta. Vultraz is currently in the captivity of the Great Beings of The Melding Alternate Universe.

Whilst living on the Tren Krom Peninsula, Vultraz gained a reputation as a criminal. He killed Mazeka's mentor to steal his research, which included theories about how the Great Spirit Mata Nui created the Makuta species, and later murdered an entire village to obtain a rare lava-gem. These actions led Mazeka to wish to bring him to justice, and the two clashed many times. Five years ago, Mazeka managed to kick Vultraz over a cliff, seemingly to his death.[1]

Vultraz survived the fall, though he was incredibly damaged, and was saved by Rahi following Makuta Gorast. Gorast rebuilt him so he would no longer be recognizable and better suit her needs. She then tasked him with hunting down the Matoran Krakua.[4]

Vultraz tracked down Krakua's village and used a device that amplified sound to knock out several De-Matoran. He then fought Mazeka, who recognized him by his fighting style.[3] Vultraz let Mazeka live, taunting him by stating that Mazeka would only ever live because he allowed it.[5]

Vultraz went on to act as a spy for Gorast, and specialized in spying on Matoran who had the potential of rebelling against the Brotherhood of Makuta.[6]

Makuta Icarax used a Shadow Leech on Vultraz, making him the second Matoran to be transformed into a Shadow Matoran. Icarax also experimented on Vultraz.[7] Shortly afterwards, Vultraz discovered a side entrance to Karda Nui in its western wall, but did not tell the Brotherhood of his discovery. When Gorast learned of this, she punished him with a blow that sent him careening into Mutran's laboratory on Destral.[8] Vultraz became a faithful servant of Makuta Icarax[7] after he prevented Gorast from killing the Shadow Matoran.[9]

During the Siege of Karda Nui, Icarax sent weak telepathic messages ordering Vultraz to come to Karda Nui. Knowing that Icarax was badly injured, Vultraz proceeded to Karda Nui, recovering the valuable tablets which he had stolen long ago to give to Icarax.[10] To aid him in his travels, he constructed a vehicle and had its Midak Skyblaster modified by a Nynrah Ghost on Stelt so it fired spheres of Shadow instead of Light.[7][11] He then used the vehicle to attack a Matoran village, killing two and injuring twelve of the inhabitants, before departing for Karda Nui.[5]

Once in Karda Nui, Vultraz began searching for Icarax. However, he found his old nemesis, Mazeka, instead. Intending to defeat Mazeka once and for all, Vultraz pulled his vehicle into a power dive and raced towards Mazeka. Before the two could reach each other, a portal opened between them (created accidentally by Vezon),[12] and the two were sent through to an alternate universe. There, Vultraz managed to escape his Skyfighter as he plummeted towards a gigantic organism, which attacked him and destroyed the vehicle. Together with Mazeka, the two encountered alternate versions of Helryx, a Matoran in that universe, and Macku, a Toa, who explained that they were in a place named Spherus Magna.[10]

Vultraz then accompanied Macku to the village of Ga-Koro. On their way there, Vultraz and Mazeka influenced her to tell the story of the Melding so that they could have an understanding as to where they were. Mazeka then inquired about a way to return home, and Macku directed them towards the Great Beings to assist them. Once she left, Mazeka confronted Vultraz about returning, for Vultraz decided he would rather stay and conquer Spherus Magna than return home.[13]

Macku then handed the two Matoran over to Teridax, who escorted them to the fortress of the Great Beings. When they passed the alternate Icarax and Gorast at the gates of the fortress, Vultraz commented about her white armor and she lifted him off the ground and dropped him telekinetically. They eventually arrived in a council chamber, after being led there through a complicated route by Teridax, and were approached by the Great Beings. Teridax, at some point, had read Vultraz's mind, and discovered he was full of shadow. The Great Beings were shocked to discover this, and insisted on performing tests on him. In return for Mazeka's return to his universe, they chose to keep Vultraz for study. He was then captured by Chirox and Vamprah.[14] 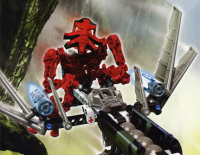 Vultraz is selfish and uncaring of others, perfectly willing to kill as many as he needs to in order to get what he wants. If someone has something he wishes to have, then he will destroy their entire village to get hold of it.[1] He shows no remorse for the death he causes, and seems to take pleasure in punishing those who oppose him. He has a habit of spinning his blade before he makes a kill.[5]

As a Ta-Matoran, Vultraz possessed resistance to heat. This resistance was negated when his Light was removed, but he gained the ability to fire Shadow bolts.

Vultraz is also a brilliant engineer, having built his Skyfighter and equipped with stolen weaponry.[15]

Five years ago, Vultraz wielded an acid blade.[1] Makuta Gorast later gave Vultraz a razor-sharp sword and a sonic device that he used to incapacitate an entire village of De-Matoran.[16][17]

Vultraz rode a Skyfighter that he designed himself. He armed the vehicle with a stolen Midak Skyblaster modified to fire Shadow blasts.[7] 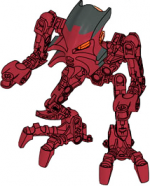 8698 Vultraz was released as a set in August 2008. The set contains Vultraz and his Skyfighter. Like all Shadow Matoran sets, Vultraz wears a dual-colored mask, his featuring a mixture of dark red and black plastic. The set consists 133 pieces, twelve of which are used to build Vultraz.

"I left the simple, innocent life of a Matoran behind me long ago. I buried it the same way I will bury you, Mazeka, if you don't get out of my way."
— Vultraz, BIONICLE.com

"This isn't one of your epic fables. You're a thief and a murderer, Vultraz. You killed an entire village of Matoran who never did a thing to you."
"Except have something I wanted – an intact lava-gem, a rare find on the Tren Krom Peninsula. They didn't want to give it up... thought it appeased the volcano or some such thing, kept it from erupting ... a few well-timed explosions and one sea of lava later, and they found out how wrong they were."
— Mazeka and Vultraz, Brothers In Arms

"How many times do we have to do this? When are you going to realize that you're not a Toa ... just some crazy villager who thinks he has to risk his neck fighting the bad guys? Go home, Mazeka. Go back to your little life, before you force me to end it."
— Vultraz, Brothers In Arms

"I don't think we're in Karda Nui any more. Maybe if I tap my red feet together three times and wish real hard..."
— Vultraz, Brothers In Arms

"I have seen the rot in his spirit. And much more ... things that shame me. I have peered into a distorted mirror, one I wish I could smash to bits."
— Alternate Teridax, Brothers In Arms