"Panrahk, the Fragmenter-Rahkshi. The arc of your dark energy will cause anything in its path to explode into pieces."
— Makuta Teridax's thoughts, Mask of Light

Panrahk are the Rahkshi of Fragmentation.

Panrahk revealing its Kraata in Mask of Light

The Panrahk that struck the island of Mata Nui was created when Teridax immersed a Kraata-Xi into Energized Protodermis. The Kraata transformed over time into a Rahkshi. However, the Rahkshi armor could do nothing on its own, thus Teridax stored it in a large green pillar in his lair, the Mangaia, along with the armor of the Rahkshi Turahk, Guurahk, Lerahk, Kurahk, and Vorahk.

When Teridax learned of the discovery of the Kanohi Avohkii, he released Kraata into the Panrahk, Guurahk, and Lerahk Rahkshi, giving them life and will, and sent them to kill Takua, the one who would become the Seventh Toa, and to retrieve the Avohkii. Panrahk and two other Rahkshi, Lerahk and Guurahk, broke out from the Kini-Nui and attacked Gali Nuva, but she escaped. The Rahkshi then headed to Ta-Koro, where they blasted Tahu Nuva through a wall, though the Toa recovered soon after and trapped it in a ring a fire momentarily. After engaging in battle with Tahu and Gali, Panrahk was responsible, along with the Lerahk and Guurahk, for the destruction of Ta-Koro. They then chased after Takua, only to wind up in a fight with Tahu, Gali and Lewa. It helped to trap the Toa Nuva inside an avalanche before continuing the chase, being responsible for sealing Onua, Pohatu and Whenua inside a cave full of Kraata, before traveling to Ko-Wahi with the other Rahkshi to find Takua. There they faced and knocked down Kopaka, but when they were about to grab Takua, the Toa of Ice made them fall to the water and then froze the lake.

Teridax, sensing that his three "sons" were defeated, sent three more Rahkshi: Turahk, Vorahk and Kurahk, to go free them. Unbeknownst to them, the combined powers of Lerahk, Guurahk and Panrahk cracked and melted the ice.[1]

Panrahk later assisted in the ambush against Kopaka Nuva, by creating a diversion along with Guurahk so the Rahkshi could escape.

Later, it combined with Guurahk and Vorahk to form a Rahkshi Kaita Vo. It, along with the Rahkshi Kaita Za, caused havoc in Le-Wahi and fought Tahu, Lewa and Kopaka. It drained Lewa's energy, but its final attack was redirected by Kopaka at its brother. Tahu then brought down part of the mountainside on the Kaita as the Toa left. The Rahkshi Kaita separated some time later.

Panrahk, along with the other Rahkshi, fought the Toa Nuva in the Battle for the Kanohi Avohkii at the Kini-Nui. It was captured inside a glass prison by Tahu Nuva and Lewa Nuva. Its armor was then dismantled along the other five Rahkshi's to build the Ussanui.

In an alternate timeline, a Panrahk managed to get through the light barriers protecting the Kingdom of the Great Spirit. It was discovered by a group of Fe-Matoran and killed by Dark Hunters.

The power of Panrahk is so great that the ground underneath their feet cracks as they walk, in compliance to their explosive nature. They are created from Kraata-Xi that are dipped into Energized Protodermis. A second Kraata-Xi is then needed to run the Rahkshi armor that is created.

Using their Staffs of Fragmentation, Panrahk can cause objects to explode with tremendous force, or send energy beams through the ground or air which explode on command.

Panrahk was released as a set in the summer of 2003. It contained forty-five pieces, including a rubbery Kraata. It could be combined with the Guurahk and Vorahk sets to form the Rahkshi Kaita Vo. Certain canister sets were packaged with a mini CD that explained the characters of Panrahk and Takanuva. 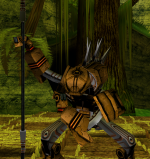 Panrahk in BIONICLE: The Game