"Take to the shadows. They are, after all, the prisons we have made for ourselves."
— Makuta Krika, Swamp of Secrets

Krika was the Makuta of the northern region of the Northern Continent and a member of the Brotherhood of Makuta.

Krika was brought into being 100,000 years ago by the Great Spirit Mata Nui,[3] using a pool of the substance known as Antidermis located on an island in the south of the Matoran Universe.[4] As was intended, he became a member of the Brotherhood of Makuta, an organization devoted to serving the will of the Great Spirit and maintaining order. Krika was responsible for creating several species of Rahi to populate the universe.[3]

After the Matoran Civil War on Metru Nui, Krika was assigned by the Brotherhood's leader, Miserix, to monitor the northern area of the Northern Continent.[5]

When Teridax demanded a convocation to reveal his plan, Krika was one of the last to agree to go along with the plan, despite not expecting it to turn out well. With this support, Teridax seized control of the Brotherhood of Makuta. Shortly afterwards, Krika and Spiriah were ordered by Teridax to kill Miserix.[6] However, Krika secretly disobeyed the order, and instead hid Miserix on Artidax, an island far to the south of the Matoran Universe. He also put many traps and Rahi to stop any other Makuta from going there to kill the imprisoned Miserix or Miserix escaping.[7]

When Spiriah went rogue due to his failure with experimenting on the Skakdi, Krika was assigned to take over his region, Zakaz.[1]

Krika, like the other Makuta, evolved beyond the need of a physical body, turning into a gaseous Antidermis within armor. Teridax ordered the Nynrah Ghosts to come to Destral to modify his armor to accommodate for the new viral form of the Antidermis.[8]

Krika and several other Makuta were assigned to invade Karda Nui to control Mata Nui's situation. Krika was the commander of the team that invaded the Swamp of Secrets,[9] all of whom took the forms of swamp insects. Krika was the first of the three Makuta to arrive in the swamp, and was mutated most severely of them by the Pit Mutagen, which had the effect of locking him in his form, and mutated him in several other ways.

Krika first revealed himself to the Toa Nuva near the Codrex when he appeared to feed on Tahu's energy, when the Toa had been weakened by the Codrex's energy field. He conversed with Tahu about his fate, and his own musings as to why the Brotherhood wanted power. As Krika talked, Tahu used his diminished elemental energy to heat the ground Krika was on, causing the Makuta to cry out in pain and drift back into the swamp. When the other two Toa Nuva arrived, he and the other two Makuta prepared to attack. Chirox suddenly fell from the sky, and the Toa were able to escape from the distracted Makuta.

Krika, Bitil, and Gorast then returned to his cave with a Keystone. The Toa Nuva attempted to trick the Makuta with time-delayed blasts of elemental energy, so they could enter the lair and steal the Keystone. However, Krika was not deceived by this ruse, and soon doubled back with the others to confront the Toa. Tahu bluffed that they had found the Kanohi Ignika and given it to Pohatu. However, a telepathic message from the Phantoka Makuta revealed that the Ignika was indeed in the custody of the Toa in the air. The three Toa then escaped into the mud. Gorast wanted to go after them, but Krika stopped her, and the Makuta instead went to the Codrex to ambush the Toa Nuva.

Upon reaching the Codrex and seeing no sign of the Toa Mistika, Krika ordered the Makuta to wait in the shadows. Too busy musing about Teridax's plan, and its effects on the universe, Krika was caught unawares by the Toa Nuva. After exchanging blows with Tahu, Krika bluffed that the Toa were too late, and that Bitil had already tampered with the field surrounding the Codrex, and that it would implode. Tahu called the bluff, and fired his Nynrah Ghost Blaster, trapping Krika in an energy field. They were soon joined by the Toa Phantoka, as well as the Makuta Phantoka, and the two sides readied for a final battle.

Krika in his mutated insect form

In the ensuing battle, he briefly battled with Gali, and offered her mercy, imploring her to escape Karda Nui. Takanuva intervened with an energy burst of Light and, seeing that a Toa of Light had joined the battle, Krika resigned himself to his fate and left the area.

Krika departed to the Codrex, and hovered just outside the energy field surrounding it. He was confronted by Icarax, who persuaded him to destroy the energy field by entering it in his intangible form and re-materializing in the middle of it. Krika succeeded and the force field, stuck with something which it could not be rid of, soon overloaded and failed. Exhausted by the attempt, Krika fell to the ground.

Krika later overheard Takanuva informing the Av-Matoran that the Energy Storms would hit Karda Nui once Mata Nui was reawakened, and that anybody who remained in the core would be killed. Krika sped off to inform the other Makuta, in hopes of convincing them that they were soon to be betrayed by their own leader. However, upon seeing Krika, Gorast went into a maddened rampage and used her Felnas on Krika's intangibility powers. Krika lost control of his ability to turn tangible, and he eventually faded from existence.

In this alternate universe, Krika, along with Teridax and Kojol, resided in a chamber in the Archives. The Makuta asked Takanuva to eliminate Jaller and retrieve the Vahi for them, in exchange for their helping him find Brutaka. Before Takanuva left, he gave him a Virus, temporarily granting the Toa the ability to fly.

Krika later fought in the Rebellion Against the Toa Empire, using his Kraata power of Vacuum against Lewa until Teridax killed the Toa with a powerful bolt of lightning.

Krika had control over the element of Shadow, the ability to produce Kraata, and access to Kraata powers. He was extremely stealthy, able to seemingly vanish into the mists of the swamp at will.

As a result of his mutation, Krika was locked into the form he was in at the time and lost the ability to shapeshift. He also lost access to many of the Kraata powers. His density control power went out of control; in order to remain tangible, Krika needed to consume heat, and was able to absorb it from the air and living beings.

Krika believed that nothing good would come out of Teridax's grand plan if it succeeded, but also realized nothing good would happen to him if it failed, so for better or worse, he followed it. However, he occasionally rebelled against Teridax when it was safe to do so, such as hiding and imprisoning Miserix rather than killing him. During his time in Karda Nui, he realized that Teridax's plan would be worse for all, and tried to sabotage it in several ways, taking Gali in an attempt to persuade her to leave Karda Nui so that Teridax's plan could not be fulfilled, and allying with the rogue Icarax. He also, unlike most Makuta, respected the Toa Nuva for matching them in ability.

Krika wore the Kanohi Crast, the Great Mask of Repulsion. The mask granted him the ability to repel any object away from himself at high speed. He could also manipulate the mask's power to allow himself to fly by repelling the ground. In addition, he carried a Nynrah Ghost Blaster which he could use to control any mechanical target that he hit. He also fought with his poisonous fangs.[2] 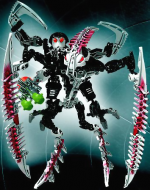 Krika combined with the Kirop set

Krika was released in summer 2008 as one of the three Mistika Makuta canisters sets, and contained forty pieces. Like the other Makuta Mistika, he has a dual-colored mask, of translucent white and light red. His spiked arms and legs are also a dual color of light red and white like his mask, and a Nynrah Ghost Blaster. He has a Matoran connection peg on his back, with Kirop being advertised as connecting to Krika, but it has no storyline significance.

In early 2009, instructions were put on BIONICLE.com for the Swamp Stalker, a Rahi combiner model of Krika, Gorast, and Bitil.

"But in Matoran legend, every pile of rocks is a treasure, every Rahi larger than a Stone Rat is a monster, and anyone who doesn't scream and run when the thunder cracks is a hero of great courage."
— Alternate Krika, Dark Mirror

"Once I was alive like you: solid and whole, needing no one and nothing. I was Makuta Krika, my name whispered in legends throughout half the known universe."
— Krika to Toa Nuva Tahu, Swamp of Secrets

"Do you know why we Makuta hate Toa so much? It's because you are what we could only pretend to be, once upon a time -- heroes who do good for no reward. And so we call you fools, and even slay you... because we could not be you."
— Krika to Tahu, Swamp of Shadows

"You are already doomed -- and that is perhaps the one thing you and I have in common."
— Krika to Tahu, Swamp of Shadows

"I am doing something a Makuta never does -- I am offering mercy. Flee, Gali -- leave this place, go anywhere in this universe, but do not stay in Karda Nui!"
— Krika to Gali, Endgame

"I expected it to attack, or scream out in rage, or do something else I wouldn't enjoy at all. Instead, the look on it's face was almost one of ... sadness, and resignation. Almost as if it knew that I, or someone like me, was coming, but had hoped against hope I wouldn't show up."
— Takanuva's thoughts, Takanuva's Blog