"It was hard to believe that this simple mask had the power to change a universe — or destroy it."
— Narrator, Time Trap

The Kanohi Vahi is the Legendary Mask of Time and one of the three most powerful Kanohi to have been created in the Matoran Universe.

Legends predicted the possibility of a Mask of Time and its powers, even though no one was even sure if it could be made.[2][3] The Brotherhood of Makuta, anticipating the Mask of Time's crafting, created Voporak. That way, if the Kanohi Vahi were to ever come into existence, the Brotherhood would have a way of tracking it down and claiming it for themselves.[4]

Makuta Teridax (in the guise of Turaga Dume) requested the forging of the Mask of Time from Vakama, a Matoran Mask Maker at that time. It was not until he became a Toa Metru, however, that Vakama was able to create the Kanohi Vahi. He managed this by forging the six Great Disks into the Disk of Time, and then carving the Disk of Time into a mask. After he finished it, Vakama used the Mask of Time against Teridax. However, he was unable to keep complete control of it, and ended up slowing time around himself, as well as Teridax. He would have been killed by Teridax's Shadow Hand had Turaga Lhikan not stepped forward to block the attack. The resulting blow killed Lhikan. This broke Vakama's concentration, blasting the mask away from him and throwing it off the Great Barrier. Teridax then leapt over the edge of the Great Barrier to retrieve it. After Teridax had reclaimed it, the Kanohi Vahi was hit with a Kanoka by Vakama, causing it to fall into the Silver Sea.[5][6]

Following the events of the Great Rescue, Vakama went to retrieve the Mask of Time. Although originally gold, it had rusted orange from extended exposure to the sea. When he found it, the Kanohi Vahi had a small crack in it and was leaking Time energy, affecting all life near it. Vakama managed to seal the crack using a pinpoint beam of fire. As he returned to the surface, he was ambushed by Voporak, who then stole the mask from him. After it was stolen from him, Vakama woke up in his home in Ta-Metru as a Matoran, as though the events of his life as a Toa had only been a dream. He then traveled around the city, trying to find the Kanohi Vahi. While searching, he realized that the entire thing was an illusion created to trick Vakama into revealing the location of the Mask of Time. After Teridax's mental illusion was dispelled, Vakama teamed up with the Brotherhood leader to retrieve the Kanohi Vahi. Meanwhile, Voporak presented it to its leader, the Shadowed One, who planned to use it to conquer the Matoran Universe. Teridax tried to barter Vakama for the Mask of Time, but the Toa managed to steal it back. Vakama then threatened to smash it while confronting Teridax, which would destroy the fabric of time. Teridax was not willing to sacrifice all of time, so he permitted Vakama to leave Metru Nui and keep the mask.[7] 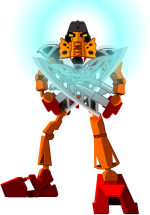 After the Toa Mata had transformed into the Toa Nuva, Vakama, now a Turaga, gave the Kanohi Vahi to Tahu Nuva, who used it to delay the Bohrok-Kal's attempt to free the Bahrag. Its power almost overwhelmed Tahu[8] and he later gave it back to Vakama, who kept it in his possession.[1]

The mask was since coveted by three powerful factions: the Brotherhood of Makuta, the Dark Hunters, and the Order of Mata Nui. The Hunters sent Voporak and Ancient on a mission to hunt down the mask,[9] but upon learning that it was in the possession of Vakama, who would destroy it to prevent it from falling into the wrong hands, they decided a raid of Metru Nui at the time would be pointless.[10] The Order, however, was content with the Kanohi Vahi being kept by Vakama, as they knew he would keep it safe.[citation needed]

Vakama kept the Kanohi Vahi in a protected room within the Coliseum, along with other artifacts, weapons, and memorials. However, Voporak returned to Metru Nui and was able to find the mask. Voporak broke into the protected room, knocking its six Ta-Matoran guards unconscious. He then stole the Kanohi Vahi and departed with it as Vakama frantically entered the chamber.[11] Later, after the Matoran Universe became uninhabitable, Voporak took the Vahi with him in escaping onto Spherus Magna.[citation needed]

In this alternate universe, the six Great Disks were kept on the island of Artakha, where its ruler experimented with them and eventually created the Kanohi Vahi.[12] Jaller, accompanied by Bomonga and Kualus, journeyed there to bring it to Metru Nui. The Teridax of that universe sent the dimensionally displaced Takanuva to intercept them and steal the mask. While traveling with them, the group was ambushed by Lesovikk, who spared Takanuva and took the Kanohi Vahi.[13]

The Kanohi Vahi contains the Legendary Power of Time. It allows its user to filter this sheer power to speed up or slow down time around a target. The mask cannot, however, be used for time travel.

The Kanohi Vahi in action

The Kanohi Vahi is one of the three most powerful Kanohi in the Matoran Universe, as it is incredibly difficult to fully control; this was shown when Tahu used the Kanohi Vahi and almost lost control of its power.[8] Only a being with exceptional willpower, like Teridax, would have been able to fully control it.[14] The mask is so powerful that if damaged, it leaks its powers out, meaning that to destroy the mask would destroy the fabric of time itself within the Matoran Universe.[15] Losing control of the mask would have the same effect.

It is impossible to create a Great, Noble, or Matoran version of the Kanohi Vahi, as a weaker mask would not be able to contain the power within itself.[16] The Kanohi Vahi, Kanohi Ignika and Mask of Creation are on the same power level because Time, Life and Creation are all fundamental forces of the universe.

In Legends of Metru Nui, Vakama used the Kanohi Vahi to slow down time around Makuta Teridax. However, he was unable to keep it from affecting himself, too. When his concentration was disrupted by Turaga Lhikan's death, the mask's power pulled back into itself and the Kanohi Vahi was hurled away from him.

The Kanohi Vahi in Legends of Metru Nui

"If the mask is damaged, it shouldn't work at all. Instead, it's pouring out power like I have never seen before, and if it sustains any more damage ..."
— Toa Metru Vakama, Time Trap

"The force of time is contained within that mask. Destroy it, and that power is unleashed upon the universe. Past, present and future all existing at once — warps and rips and hours folding in upon each other — madness and chaos as no two moments ever follow one another ... think of it."
— Toa Metru Vakama to Makuta Teridax, Time Trap

"What is that? It looks sort of like a mask — but not any mask I've ever seen."
"It is a mask. The Kanohi Vahi — the Great Mask of Time. It is the most powerful of them all."
— Toa Nuva Tahu and Turaga Vakama, Makuta's Revenge

"It's one thing to control time ... and another thing to lose control of it all. The Kanohi Vahi can only be used in the direst emergency — when there is nothing to lose."
— Turaga Vakama, Makuta's Revenge

"Vakama gave it to me. Along with a warning — that its power might be too great for even a Toa to wield. And he was nearly right."
— Toa Nuva Tahu, Makuta's Revenge