"He had never been one for deep thoughts, doubts, or reflection. His class within Skrall society – those intended by nature to be leaders and the fiercest of warriors – did not place great value on looking inward or backward. Life was simple: move ahead, conquer, secure what you have taken, and then move on."
— Narrator, Empire of the Skrall

Tuma is the last of an elite breed of Skrall and was the oppressive leader of the Rock Tribe on Bara Magna.

Tuma and his fellow Skrall originated in a mountainous area of Bota Magna.[1][2] Tuma was one of the Skrall's leading class. During the Core War that ravaged Spherus Magna, he was a general of the Skrall in battle under the command of the Element Lord of Rock.[3]

After the Shattering occurred, Tuma and many legions of Skrall were cut off from their homeland and quickly set to work conquering the surrounding area.[4] 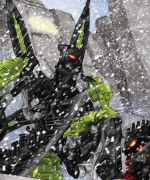 Tuma and Stronius outside their fortress

After 100,000 years, one of Tuma's patrols was attacked by mysterious enemies. The leader of the patrol managed to return to the fortress and inform Tuma, who granted the Skrall the name Branar in recognition of his efforts. More patrols were killed, and Tuma sent out messengers to the other Skrall outposts in order to marshal the legions together. Instead, he learned the other outposts had been destroyed. Tuma marched his legion into the wilderness in an attempt to combat the enemies. Stronius discovered that the enemy were machines and named them "Baterra". The Skrall legion followed two Baterra into a wooded area, only to discover the trees in the area were shapeshifting Baterra which decimated the legion. With barely 20 survivors, Tuma returned to the fortress, cautious of the Baterra's power, and entered a siege against the Baterra. The Baterra killed all servants Tuma sent to gather supplies, until one party managed to acquire a large amount of firewood. Tuma realized that the wood was a group of Baterra in disguise, but failed to prevent them from infiltrating the fortress. Overwhelmed, Tuma ordered his forces to burn the fortress and flee the region.[5] They moved south, abandoning the Sisters of the Skrall along the way.[6] South of the Black Spike Mountains, Tuma set up camp in the previously uninhabited village of Roxtus.[7]

Tuma ordered his troops to join the planetary social system, and had the Skrall fight Glatorian in order to obtain resources.[7] He also established regular "Vorox runs", in which Skrall paraded captured Vorox through the wilderness in order to test for the Baterra's presence.[8]

Through Atakus, Tuma was given an offer by Metus to collude against the other tribes. Tuma accepted Metus' deal, and he became an informant to Tuma and intermediary between the Skrall and Bone Hunters.[9] Tuma sent a patrol to retrieve the Book of Certavus, but the patrol failed, and he ordered them fed to the Spikit.[4]

As part of his domination plan, Tuma sent a Skrall to Vulcanus to claim the rights to an oasis, knowing that the Jungle Tribe desperately needed the water. After winning the battle, the Skrall returned to Roxtus with details from Metus of a trade caravan leaving from Tajun. Tuma instructed the Skrall to leak this information to a prisoner and release them. He planned for the prisoner to be captured by Bone Hunters and reveal this information in exchange for a safe passage home, leading the Bone Hunters to capture the caravan themselves and save the Rock Tribe the trouble.[7] 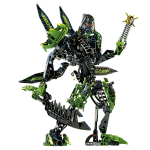 Tuma outside an arena

Tuma sent a representative to attempt to dissuade the Bone Hunters from attacking Vulcanus in order to subtly convince them to do so. A Skrall patrol leader informed Tuma of the representative's success and showed him the secretly obtained plans of the attack. Noticing signs of combat on the Skrall's armor and weapon, Tuma inquired and learned that the Skrall patrol had been assaulted by Malum and a pack of Vorox, who had then escaped. Desiring Malum's command of the Vorox, he ordered the patrol leader to get fresh Rock Steeds and a dozen warriors and capture Malum alive.[4]

Tuma met with Malum in the dungeons of Roxtus. Believing Malum possessed some sort of influence over all Vorox, Tuma sent him into the Arena Roxtus to demonstrate his control over two imprisoned Vorox. Malum made a gesture and calmed the Vorox, and Tuma ordered a Skrall to do the same. Instead, the Vorox attacked the Skrall and rushed Tuma. In the confusion, Malum and the Vorox escaped. Tuma ordered a massive hunt for the escapees, but the search party returned empty handed.[10]

War with the South

Branar returned from a Vorox run and reported that the Baterra had drawn near. Worried by the news, Tuma accelerated his plans, and ordered the Skrall to attack Atero the following day. Tuma then met with his informant Metus, who taunted him by revealing he had knowledge of the Baterra. Tuma threatened Metus with torture, but he refused to parcel out any of his information unless Tuma made him an equal partner. Quelling his rage, Tuma agreed to partner with Metus for the information.[11]

Hoping to convince the Sisters of the Skrall to fight the Baterra, Tuma traveled back to the Skrall's former home with Stronius and won an audience with their new leader, whom he knew personally. When the Sisters mentally attacked Stronius, Tuma stepped forward and was also mentally assaulted, but the Sisters eventually relented. Tuma attempted to bargain with the leader for her assistance, but she dismissed his claim, believing that the Skrall leader had nothing to offer them.[6] While being mentally assaulted, Tuma suggested that Angonce might still be on Bara Magna. He offered the Sisters information about his potential location, in exchange for his and Stronius' freedom and the Sisters' agreement to destroy Baterra they encountered, to which the leader agreed.[12]

On the way back to Roxtus, Tuma and Stronius noticed an upcoming pass had more trees in it then when they traveled through it before, and believed them to be Baterra in disguise. Stronius, angry about Tuma's bargain, suggested calling the Sisters for help, until Tuma struck Stronius and threatened to punish him for insubordination. While looking at the trees, Tuma deduced that the trees were uprooted decoys. He was then struck in the back by a Baterra and blacked out from the pain.[13] Tuma woke, unarmed, and challenged the Baterra, only for Metus to appear and command the Baterra to depart. In return, Metus insisted that he be named the heir to the Rock Tribe in the event that Tuma was unable to lead, to which Tuma grudgingly agreed. He later ordered Stronius to kill Metus if anything were to happen to him.[14]

Tuma arranged for the Bone Hunters to acquire a detailed map of Vulcanus, and expected them to raze the village and burn it to the ground. He also predicted that the map would fall into the hands of the Glatorian. Stronius confronted his master about the plans, arguing that the Bone Hunters would have a hard time succeeding with the map in the hands of the Glatorian. Tuma informed him that either outcome was in their favor: if the Bone Hunters could not succeed, there would be fewer of them to deal with, and if they did succeed, Vulcanus would be eliminated.[15]

One night, Tuma stopped Stronius from tormenting an escaped Vorox and ordered him to put the Vorox back in its cell. Stronius complied, and the two discussed military tactics before spotting the Kanohi Ignika entering Bara Magna's atmosphere. Stronius dismissed it as a shooting star, but Tuma doubled the Skrall patrols nonetheless.[16]

He later made an alliance with the Bone Hunters to attack Tajun. In the aftermath, Tuma entered the village with a force of Bone Hunters, and patrolled the ransacked city.[17]

Tuma assembled an army of Bone Hunters and Skrall in Roxtus and gave a speech about the superiority of the Rock Tribe. Mata Nui arrived in the arena, and challenged Tuma to a battle to earn the freedom of Kiina and Berix, whom Metus had captured. To avoid the shame of refusing the challenge, Tuma accepted the battle. He was easily stronger than Mata Nui, and boasted to his army after each successful blow. His boasting exposed his back injury from the Baterra to Mata Nui, who struck at it. Mata Nui's repeated blows against his wound took their toll on Tuma, and he eventually fell unconscious.[17]

The loss of the match disgraced Tuma, and the Rock Tribe abandoned him. He was briefly imprisoned by the united Bara Magna forces,[18] but in the chaos of the battle, he managed to escape. He has been reduced to wandering the wastelands with no support from his former tribe.[citation needed]

In an alternate universe, Tuma was overthrown as leader of the Skrall by the Makuta after Mata Nui arrived on Bara Magna.[19]

Tuma is the last surviving member of the elite class of Skrall, who were gifted with greater strength and agility than others. He is also an expert swordsman.

Tuma views himself as a natural born leader, one destined to conquer. His interests and motivations were not personal, and were intended for the benefit of his entire tribe. Though not incredibly intellectual, he is very cautious and manipulative, and a highly successful military tactician.[9]

Tuma carries a massive sword. He also wields a Thornax Launcher and has four Skrall Tribal Design Blades mounted on his back. For his duel with Mata Nui, he used a Saw Blade Shield.[20] 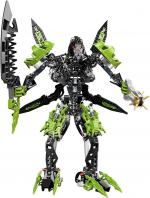 8991 Tuma was released as a 188-piece large boxed set in early 2009. His set contains a Thornax fruit as well as two rotating "life counters" mounted on his back for the BIONICLE Action Figure Game. Each "life counter" gives Tuma five life points. Also included are three stickers to be placed on the helmet—the first stickers to appear in a BIONICLE set other than the playsets of 2005.

"You realize, if I find out you are lying ... or even mistaken ... your head will decorate the walls of Roxtus?"
— Tuma, Empire of the Skrall

"Not now. Not yet. But one day ... after Bara Magna has fallen ... the Skrall will take revenge."
— Tuma's thoughts, Empire of the Skrall

"Push too far, and you may find I forget what is in the best interests of my people in favor of what would be most ... satisfying ... to myself."
— Tuma to Metus, Empire of the Skrall

"Tuma wanted to bellow in rage. He wanted to tear the traitor's head off and mount it on a pole, for all to see. He wanted to storm the villages of Bara Magna, burn them to the ground, and slay the Agori the way the baterra had slain his people, little more than a year before. Had he been but a Skrall warrior, he would surely have done that. But he was more than that – he was the lone surviving Skrall leader left alive, and he had a responsibility to the empire."
— Narrator, Empire of the Skrall

"I'm going to enjoy tearing that fancy mask from your face."
— Tuma to Mata Nui, The Legend Reborn

"Be careful; arrogance can topple giants."
— Mata Nui to Tuma, The Legend Reborn

"Arrogant, cunning, and extremely powerful, Tuma appears to outsiders like just a brute. But he is actually a skilled strategist who is willing to take time to assess an enemy and the battlefield before committing his legions. He knows he is the last of the Leader-class Skrall still alive on Bara Magna, and takes the responsibility for guiding his people to conquest very seriously."
— Narrator, BIONICLE: Mata Nui's Guide to Bara Magna