"For too long, my people have said they were 'just Matoran.' They have relied on Toa to save them, as if they were helpless Rahi who couldn't take care of themselves. No more. Today, Matoran begin fighting for what's theirs!"
— Mazeka, BIONICLE.com

Mazeka is a heroic Ko-Matoran who once lived on the Tren Krom Peninsula. He was recruited by the Order of Mata Nui and currently works as a spy.

Mazeka once worked as a Scholar in a village on the Tren Krom Peninsula. Vultraz, a Ta-Matoran, desired the research Mazeka and his mentor had worked on, so Vultraz killed Mazeka's mentor, stole the tablets, and hid them. When Vultraz murdered an entire village to obtain a rare gem, Mazeka sought him out to bring him to justice. The two clashed many times, but with no apparent victor. Mazeka never recovered his mentor's research tablets.

During a fight with Vultraz on a cliff five years ago, Mazeka seemingly killed Vultraz by kicking him over the edge of the cliff, but Vultraz was pulled to safety by a disguised Gorast. Mazeka returned to his village to spread the news of what he thought was Vultraz's death.[1]

As a result of his apparent defeat of Vultraz, Mazeka was contacted by an Order of Mata Nui agent named Jerbraz. Mazeka was tasked with stopping beings like Vultraz, and protecting their potential victims. His first mission was to seek out the Matoran Krakua.[4]

He was brought to a small village of De-Matoran by Jerbraz, who had him retrieve Krakua. Soon after he reached Krakua, a commotion occurred in the village and the Matoran of Sonics, who were sensitive to noises, were brought down by a wall of sound triggered by an assailant. Mazeka managed to place his hands over Krakua's ears just before the attack, saving the Matoran of Sonics.[2]

Krakua was taken away by Jerbraz while Mazeka faced the attacker. After some fighting, Mazeka's mask was knocked off and he fell to the ground. He realized that the intruder was actually Vultraz, except in a new form. Vultraz prepared to behead Mazeka, but decided to spare Mazeka instead, so that the Ko-Matoran would bear the shame for having his fate rest upon Vultraz. Vultraz then left the furious Mazeka, who was soon rejoined by Jerbraz. Mazeka demanded training from the Order of Mata Nui in order to track down and defeat Vultraz.[5]

During his training, Mazeka rebuilt himself into a larger and stronger form.[6] He sparred with Tobduk several times, but always lost due to his growing frustration.[7]

Five years later, Mazeka journeyed to the island of Stelt to find the whereabouts of Vultraz. There he confronted a rogue Nynrah Ghost. Based on reports that Vultraz had brought his Skyfighter to be modified by the Fe-Matoran, he forced the Nynrah Ghost to give him what information he knew. He found out from the Matoran that Vultraz was heading to Karda Nui, and that the Matoran was to bring something to Makuta Icarax. Having removed the Fe-Matoran's mask to force the news out of him, Mazeka stepped on the mask and broke it because the Matoran "took too long to answer". He then departed on his Swamp Strider.[5]

Mazeka returned to the island of Daxia, and sneaked into the fortress (taking down two guards along the way) in order to question Helryx about Karda Nui's whereabouts. Although he successfully broke into Helryx's chambers, he found that Helryx was not present and that in her room was Tobduk. Mazeka calmly questioned Tobduk about Karda Nui. Tobduk refused to answer, stating that he would only do so if Mazeka would help him on a mission.[7] After accepting, Mazeka accompanied Tobduk to the island of Destral, where they broke into the fortress, where Tobduk confronted Makuta Tridax and Mazeka dragged Vezon away.[8][9]

However, Mazeka did not know who Vezon was, and thus saw no reason for killing the insane Skakdi. Instead, he allowed the Skakdi to flee outside of Destral, and take his slim chances there. After Tobduk killed Makuta Tridax, Mazeka lied to Tobduk, stating that Vezon had died. He then left Destral with Tobduk.[9]

After gaining directions from Tobduk, and retrieving his Swamp Strider from Daxia, Mazeka made his way to Karda Nui. Once there, Mazeka began his search for Vultraz, who had stolen Mazeka's mentor's tablet theorizing how the Great Spirit Mata Nui created the Makuta species. As he was searching, Vultraz spotted him from above on his Skyfighter. Vultraz set his vehicle on a power dive towards Mazeka, who doubled back to attack Vultraz. Before either reached each other, a portal (accidentally created by Vezon[10]) suddenly opened between them, and both Matoran hurtled into it.[11]

A moment passed, and Mazeka then found himself exiting the portal and heading towards a massive tree banded with golden metal. He jumped clear of the tree just in time, and found Vultraz clinging to a tree, his vehicle having plummeted towards a giant creature in a lake, who promptly destroyed it. Mazeka then spotted a Ga-Matoran resembling a Toa and a Toa of Water resembling a Matoran coming out of the surrounding woods, and questioned them of his location. The Matoran-like being responded by telling him that she was Toa Macku, that he was on Spherus Magna, and that she was pleased to meet a survivor of the Melding.[11]

Intrigued by their location, Mazeka questioned Macku about the story of Spherus Magna. Macku told the pair about the emergence of the Energized Protodermis, and how the Great Beings created the Toa, who were short in stature, to retrieve the substance and repair the damage caused by the Protodermis which threatened to shatter the planet. After she finished talking, Mazeka questioned about how he and Vultraz could get back home. Macku then redirected them to see the Great Beings.[12]

After Macku left, Mazeka confronted Vultraz, who was interested in staying and taking over the alternate Spherus Magna. Soon afterwards, Macku arrived with the alternate Teridax, who guided them to the Great Being's fortress. After a long trip, they arrived, and made their way through the many elaborate designs that led into the Great Beings' council room. Teridax soon brought to their attention that upon reading Vultraz's thoughts, he discovered that he was filled with shadow. The Great Beings insisted upon using the Shadow Matoran for testing, and attempted to make an offer with Mazeka that if he wanted to return to his home world, then he would have to leave Vultraz in Spherus Magna, although he could take one person from the alternate universe back with him. Mazeka still felt responsible for bringing Vultraz to justice, so he refused to accept the offer. However, the Great Beings forced him to accept the deal, and had Chirox and Vamprah drag Vultraz off. The Ko-Matoran picked Teridax, and the two prepared to return to Mazeka's dimension.[13]

The pair eventually arrived in an uninhabited region of the Southern Continent. The Makuta demonstrated his light powers to the Matoran by killing the dangerous carnivorous grass residing there.[14] The two had reached a slope above a deserted Ba-Matoran village when a wind sent by the main dimension's Teridax blew them down into the village, where Mazeka landed on and crushed one of the many of the bodies of dead Visorak. Teridax of the prime reality spoke to the two through the dead spiders, and teleported three Shadow Takanuva to battle his alternate counterpart.[15] While the Melding Teridax combated two of them, Mazeka attacked the third. After one cloaked himself in a field of shadow, Mazeka used his honed senses and attacked the remaining Takanuva. However, he soon found himself strangled by Shadow tendrils, though he was saved when the Takanuva was crushed by the Melding Teridax. While they celebrated their victory, Teridax quickly teleported himself and Mazeka out of the village, escaping the worst of an earthquake caused by the main dimension Teridax's death.[16]

Mazeka migrated to Spherus Magna to start a new life, with the Matoran Universe left in ruins.[17][18]

Mazeka is highly skilled in combat and a great strategist as a result of his training with the Order. He is also larger than most other Matoran because he rebuilt himself. As with all Order members, his mind is shielded from telepathy and mental attacks through training.

Before joining the Order, Mazeka was, like most Matoran, peaceful and only fought Vultraz out of necessity. As a result of his experiences since then, and learning the prevalence of evil in the universe, he focuses more on his goals than his methods, and will use any means necessary to complete his missions.

As with every Ko-Matoran, Mazeka has a resistance to cold.

Mazeka once used a small dagger during a fight with Vultraz. He also kept several weapons in his home.

Mazeka piloted the Swamp Strider, a powerful vehicle crafted by Helryx. The strider was armed with a heavily modified Midak Skyblaster, but was destroyed when Mazeka was sent to an alternate dimension. 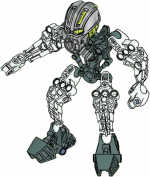 "I really don't want to kill you. You're a link to my past ... a reminder of all the things I avoided becoming. But you keep getting in my way, and I can't have that."
— Vultraz to Mazeka, Brothers In Arms

"Everything ends eventually... and sometimes, you're not sure why."
— Mazeka, Brothers In Arms