The Toa Metru travel through a village.

Assembler's Villages consisted of small shacks and outdoor work stations where Po-Matoran Crafters assembled Matoran goods and tools. Parts were sent to these villages by Chute, Boat, Airship, and Ussal Cart, then were constructed by skilled Matoran artisans.

Due to the relative isolation of these villages, they were highly vulnerable to Rahi attacks. The villages were threatened by Stone Rats, Kinloka, Rock Raptors, and many other creatures. As a result, Po-Matoran spent a great deal of time training self-defense maneuvers with Kanoka Launchers.[citation needed: MN-CoL?]

During their search for the missing Toa Mangai Lhikan, Toa Metru Vakama, Nokama and Matau traveled through an Assembler's Village. They were ambushed by the Dark Hunters Nidhiki and Krekka, but the skirmish was interrupted by a herd of stampeding Kikanalo. The Dark Hunters were temporarily defeated when one of the Rahi knocked out a support on one of the statues and it fell on them. The Kikanalo herd was stopped when Nokama discovered her Kanohi Rau mask power to communicate with the chief. Learning that the Dark Hunters had taken Lhikan to the Prison of the Dark Hunters, the Toa Metru departed the village.[1] 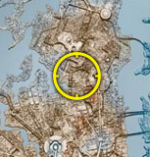 An Assembler's Village as seen from the air