"Do I hold within my backpack the key to solving this mystery? There is only one way to find out."
— Takua's thoughts, Mata Nui Online Game 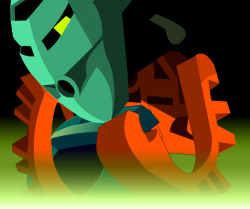 Takua searching through his backpack

In the Mata Nui Online Game, Takua the Av-Matoran Chronicler collected and used several items during his travels around the island of Mata Nui. He carried these items everywhere he went in a small backpack. Some of these were used once and subsequently lost and others were used repeatedly and kept until the conclusion of his adventure.

The Book of Chronicles, also known as the Episode Book, was a mysterious item that has the ability to record events as video footage, and replay it at the viewer's leisure. Little is known about its past, except that it was kept by Turaga Nokama. She gave it to Takua when he showed her a Po-Koro Chisel from Onewa as proof of his accomplishments. She hoped that the Book of Chronicles]] would allow Takua to keep a record of all he saw on his journey, so that it could be viewed even if something should happen to Takua. Takua would go on to continue keeping a record of what he saw and learned.

The Flute was a Le-Matoran musical instrument. When Takua discovered it in Le-Koro, the Flute was fitted with a Flutesong, a device which lit up the keys of a certain musical sequence. When played, it succeeded in drawing the Le-Matoran out from their hiding spots. Later, when Takua and Kongu helped in the rescue of Turaga Matau from the Nui-Rama Hive, Matau gave him a second Flutesong, which when played, would summon a Kewa bird to expedite travel around Mata Nui.

The Gnomon was a missing part of the Great Sundial at the bottom of the Great Mine. The Gnomon is the part with the purpose of casting its shadow on the sundial. This object was discovered in the foothills of Mount Ihu by the Ga-Koro Astrologer and later given to Takua to be returned to its rightful place. Used in combination with a Lightstone, it could open a passageway that would later be used by Takua to reach Mangaia.

Heatstones are stones similar to Lightstones, that give off both heat and small amounts of light. Takua found one in a hut at the North March, and used it to defrost Kopeke.

Takua obtained his Lavaboard from a Ta-Matoran Lava Surfer and used it to surf across the lava spill that was obstructing passage to the Cavern of Light to reroute it and restore access to the Cavern.

Letter to the Astrologer

The Letter to the Astrologer was a stone tablet carved by an Onu-Matoran Prospector with sketches of the Great Sundial. It was delivered by Takua to the Ga-Koro Astrologer, Nixie, who sent him back with the Gnomon.

The Letter from Nuju was a stone tablet carved by Turaga Nuju and given to Takua to be shown to each of the other Turaga. It detailed the imminent battle with Teridax and the fateful preparations the Turaga had to make to be ready.

A Lightstone was originally found in Nokama's flooded hut, but it is now present at the beginning of the game. In gameplay Takua used the Lightstone to reveal the Machine Part underwater, to find his way in the underground tunnels connecting the different Koro, and to provide the light required to activate the Onu-Koro Sundial.

The Machine Part was a gear in a Ga-Koro hut flotation pump that was lost in the waters beneath the village and retrieved by Takua using the Lightstone.

The Po-Koro Chisel was a carving tool that belonged to Turaga Onewa. Onewa rewarded Takua with the Chisel when he discovered the plot behind the Po-Koro Epidemic and helped Pohatu to destroy the Infected Kolhii Balls. When he showed it to Nokama, Takua was given the Book of Chronicles. After entering Mangaia and witnessing the Toa's triumph over Teridax, a door opened to the Bohrok nest. Unfortunately, it was at that moment that Teridax woke the swarms. To escape, Takua fitted the Chisel into the niche of a strange golden sphere, which activated a protective energy field around him and opened the Bohrok Nest Portal that led to the Ta-Wahi Beach.

The Quarry Key was a small stone device found near Ahkmou's Comet trading stand. It opened one of the entrances of the Po-Wahi Quarry. The element symbol on the key matched the Toa who wore a mask in the shape of the corresponding entrance. This varied in gameplay - the one shown here bears the symbol of Stone. It was unnamed in the game (listed only as "???"), to avoid revealing its use.

The Ensign was engraved with the official symbol of the Ta-Koro Guard and allowed the bearer to identify themselves as a member and to gain access to restricted areas and privileges, such as the use of the Ko-Koro Cable Car. Jaller instated Takua as a member of the Guard and gave him an Ensign to travel to Ko-Wahi to solve the mystery of the missing patrol.