Tanma is an Av-Matoran who allied himself with the Toa Nuva in order to awaken Mata Nui.

Tanma in front of the Stalactite Villages

Tanma was created by the Great Beings to participate in the construction of the Great Spirit Mata Nui. At one point, Tanma and the other Av-Matoran left their homeland underneath the Southern Continent to colonize Karda Nui before the awakening of Mata Nui. The colonization effort was hampered by frequent attacks by the Avohkah, but the Toa Mata soon arrived to deal with the threat.[5] Tanma later returned to the Av-Matoran homeland in the caves below the Southern Continent.

During the Great Cataclysm, the resulting earthquake caused part of the homeland of the Av-Matoran to fall back into Karda Nui, forming the site of the Stalactite Villages. Tanma took up residence in one of the villages.

Over a thousand years later, Tanma was working with Gavla, checking the ScareRahi they had established when Gavla was attacked by Makuta Chirox. He fled to their village, only to find that the Makuta had corrupted all of his fellow villagers. He escaped and ran to the other villages to warn them, but the other villages eventually also fell.

Weeks after the attack, Tanma became the leader of the remaining Av-Matoran after Kirop, his good friend and their former leader, had been transformed into a Shadow Matoran. Once all the surviving Av-Matoran from all the villages in Karda Nui had come together, Tanma directed them to hide in one of their underground shelters. While they were in the shelter, the Makuta bombarded it from above with Tridax Pods containing Shadow Leeches. The Leeches could not get into the shelter, and they quickly died due to their short life spans.

Once the attack stopped, Tanma opened the hatch of the shelter to check to see if it was really over. He spotted the Makuta flying away, and also witnessed Toa Mahri Matoro falling in the waterfall. He sensed that something significant was about to happen and quickly ran back to the remaining Av-Matoran and told them to take cover. Seconds later, light flooded through the room, heralding Matoro's sacrifice, and Tanma closed his eyes, saving himself from being blinded. When he looked outside after the light, he noticed that the Makuta were completely blind, and realized then that the Av-Matoran had a chance to fight back.

Tanma and several other Av-Matoran, including Photok and Solek, swiftly mounted a strike against the Makuta, who used Shadow Matoran as their pilots. Tanma was attacked by some Shadow Leeches, but fired a Light bolt which destroyed them. Suddenly, the Toa Nuva appeared in the air before them. Lewa then tried to capture a Shadow Leech, but Tanma stopped him from doing it, and accidentally connected to the Toa, sharing his memories of the past. Overwhelmed by the new arrivals, the Makuta then retreated. Tanma and the remaining Av-Matoran brought the Toa Nuva into the shelter, where they discussed the happenings of the past weeks. Tahu, Gali, and Onua split off from the group to go to the Swamp of Secrets to find the Mask of Life, while the others stayed to help the Av-Matoran.

Later, Pohatu and Photok were lured in a trap and defeated by Chirox. Lewa and Tanma, along with Kopaka and Solek, mounted another assault, although Kopaka and Solek were defeated by Vamprah, and captured. Antroz, hidden under the cover of darkness, informed them of their imprisoned allies. Dodging Chirox and Vamprah, they went to the cave where Antroz was guarding the four heroes, who were hanging unconscious, from the ceiling. Lewa woke up Pohatu and fought Antroz using his Midak Skyblaster, Tanma providing the light for it. After temporarily defeating Antroz, Pohatu and Lewa carried the others outside and escaped.

While some of the Matoran connected with the Toa Nuva, Lewa created a cyclone which caused a Shadow Matoran spy, Kirop, to fall to the ground. The Toa Nuva quickly went to the stalactite where he had fallen and captured him. Tanma and the Toa Nuva discussed a plan knowing that Kirop would wake up and hear it, eventually following him back to the Shadow Leech Hive.

Though they managed to infiltrate the Hive, the group was defeated and taken hostage, and the Matoran were separated from the Toa. Pohatu managed to escape and freed everyone else, inciting a fight that spilled out into the surrounding skies. The Toa gained the upper hand in the fight with the assistance of the Toa Ignika, a form the mask created for itself. Mutran ushered his allies down to the Swamp, but upon going himself, he was caught by the Toa Nuva and Av-Matoran. After forcing him to tell where the Makuta were headed, the Toa Nuva went down to the swamp, with Tanma and their other Av-Matoran partners to assist them.[6]

Later, Tanma, Photok, and Solek joined with Takanuva to gather all of the Matoran in Karda Nui. Soon, Vican encountered the group and revealed that a Rahi could cure Shadow Matoran. They found the Rahi, a Klakk, and though Radiak claimed to be cured, Tanma remained skeptical because there was no physical change. Takanuva then told Tanma, Solek, and Photok to go get the other Shadow Matoran to be cured. They managed to acquire the other Shadow Matoran, curing them all.[7] Under Takanuva's orders, Tanma and the other Av-Matoran fled Karda Nui and traveled to Metru Nui.

When the Great Spirit Robot was damaged beyond repair and Teridax defeated by Mata Nui, the surviving Matoran of Metru Nui made a mass evacuation to the reformed planet of Spherus Magna.[8][9]

In this alternate universe, Tanma was one of the several Matoran who were transformed into Toa by Takanuva, who sacrificed his powers and became a Turaga. After becoming a Toa, he changed the color of his armor from green to the original white and gold. When Toa Takanuva of the prime universe arrived in the dimension, he was partnered with Tanma to investigate the appearances of Rahkshi in the Kingdom. When Takanuva insisted on bringing along Matoro, Tanma voiced his displeasure with this decision.

When they arrived in the underground Bohrok tunnels in Po-Wahi, Tanma, Takanuva and Matoro confronted Makuta Teridax, who cloaked the Rahkshi in shells of Shadow for them to get past the light barrier. During the fight, Tanma destroyed the Kraahkan, but was killed by Teridax's shattering power.[10] 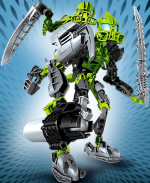 Tanma teaming up with Lewa

As an Av-Matoran, Tanma has the ability to change how the color of his armor appears. He has been trained to use this ability reflexively, helping keep his elemental affiliation secret. Tanma can also channel small amounts of Light energy through his hands or tools.

After the Makuta invaded, Tanma swiftly grew used to being the leader of the remaining Av-Matoran, and was learning to direct the Av-Matoran during the attacks. Tanma is bold yet sensible, knowing that his allies, during the invasion, had to use hit and run tactics to prolong their survival.

Tanma acted as a living source of energy for Lewa's Midak Skyblaster, preventing it from draining light from the surroundings instead, and could also share his knowledge of Karda Nui with Lewa Nuva while they were physically linked.

Tanma wears a noble-shaped Miru[1][2] and wields dual Power Swords. Like other Av-Matoran from Karda Nui, he has a rocket booster attached to his back. 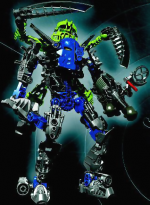 Tanma combined with the Gali set.

8944 Tanma was released in early 2008 as one of the six Matoran sets. The set consists of fourteen pieces and can be attached to Lewa Nuva's back. Along with Radiak, Antroz, and Lewa, Tanma is part of a Makuta combiner named Spiriah. Tanma is advertised with the Gali Mistika set, showing him connected to her, though it is merely for promotion.

"The life of one Matoran doesn’t matter compared to the fate of the whole universe."
— Tanma, BIONICLE.com