"Could be a trick. It probably is -- but if he really needs help..."
"Then I'm going along!"
— Toa Nuva Pohatu and Photok, Realm of Fear

Photok is a courageous Av-Matoran who allied himself with the Toa Nuva in order to save Mata Nui's life.

Photok was created by the Great Beings and tasked with helping in the construction of the Great Spirit Mata Nui. After laboring in darkness to create the islands and locations of the Matoran Universe, he and the other Av-Matoran were tasked with the preparation of the universe core, Karda Nui for the Great Spirit's awakening. During this time, he developed a close friendship with fellow Av-Matoran Radiak. When the Av-Matoran suffered attacks from the lightning-like Avohkah, the Toa Mata were summoned to protect them.[4] Photok later returned to his homeland in the caves below the Southern Continent.

During the earthquake caused by the Great Cataclysm, part of the Av-Matoran homeland fell into Karda Nui and formed the Stalactite Villages. Photok lived in one of these villages and adapted to the harsh new lifestyle brought about by this change.

Over 1,000 years later, a team of Makuta invaded Karda Nui. Although Photok was spared being turned into a Shadow Matoran, Radiak was transformed. As a result, Photok frequently clashed with his old friend.

After the Toa Nuva arrived in Karda Nui, Radiak led Photok and Pohatu into a trap. Photok was hit with a Shadow blast from Antroz. He, Pohatu, Kopaka, and Solek were later bound by the Makuta in chains of shadows, hanging from the ceiling of Karda Nui. Lewa and Tanma then arrived and rescued them. After that battle, Lewa shot down Kirop for target practice, and then Kopaka captured the unconscious Matoran. The three Toa Nuva and Matoran set up a plan to trick Kirop into leading them to the Shadow Leech Hive. Once inside, Photok, Pohatu, Lewa, Tanma and Toa Ignika were exploring the hive, when the two Toa Nuva and Av-Matoran found that Toa Ignika had been replaced by a massive worm creature. Unbeknown to the Toa and Matoran, it was actually an illusion made by Mutran. They therefore began attacking the Ignika. Angered, the mask began sucking the life out of the four heroes, and Photok was the first to notice. Pohatu then stopped the Ignika, and the Toa apologized for shooting at him. Seconds after, a power scream came from within the main part of the cave, causing the Toa to faint. When they woke up, the Toa and Matoran were separated, all held hostage by the Makuta. Pohatu then shared his Kakama Nuva mask power with the four Toa, and they rocketed out of the hive, shattering the Shadow Leech vats, rescuing the Matoran, and injuring Vamprah and Chirox.

Later, the group snuck into the Makuta's main base while the Makuta were destroying the remaining village, and engaged them when they returned. During that fight, Pohatu and Photok activated their speed powers and began injuring Antroz, going in tight circles around him. While a thousand hits were delivered every second, Icarax flew to the spot and used his gravity powers to make the Toa - Matoran pair and Makuta fall. While Antroz fell, Antidermis leaking out and blind, Pohatu tapped into Photok's memories and found a spot where there was a stalagmite in the swamp. Painfully, he and Photok slammed through it, then were released because Icarax's concentration was broken by Toa Ignika. Once the battle was over, and the three Makuta headed to the swamp, the Toa surrounded Mutran and questioned him about where the Makuta were going. He revealed they were going to the Swamp of Secrets, and the Toa and Matoran followed.[5]

Some time later, Takanuva met with Solek, Tanma, and Photok. Together, they subdued Radiak, who was harassing Takanuva, and set out to round up all of the Matoran. They then witnessed Radiak become an Av-Matoran again after he attacked a Klakk.[6]

Under the order of Takanuva, Photok and the other Av-Matoran fled Karda Nui and traveled to Metru Nui. There, they celebrated the reawakening of Mata Nui, although the occupants of the Coliseum were soon interrupted by Teridax who announced his rule over the universe.

When the Great Spirit Robot was damaged beyond repair and Teridax was defeated by Mata Nui, the surviving Matoran of Metru Nui made a mass evacuation to the reformed planet of Spherus Magna.[7][8] 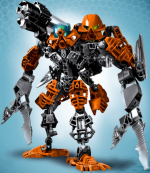 Photok "teaming up" with Pohatu

As an Av-Matoran, Photok has the ability to change how the color of his armor appears. He has been trained to use this ability reflexively, helping keep his elemental affiliation secret. Photok can also channel small amounts of Light energy through his hands or tools. When combined with a Toa, Photok has the light-based power to move at the speed of light, and can also share his memories. Photok is known to take risks, and perform large stunts. He was known to be good friends with Radiak, willing to trust him even after Radiak was turned into a Shadow Matoran.

Photok wears a noble-shaped Kakama[1][2] and wields dual Power Swords. He wears a rocket booster attached to his back. 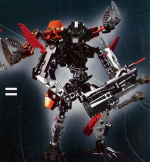 Photok combined with the Onua set

8946 Photok was released as one of the six 2008 Matoran sets. He consists of 14 pieces, and can "team up" with Pohatu Nuva. He is also seen "teaming up" with Onua on his canister, although this was merely for promotion and has no storyline significance.

"What the rampaging Rahi was that?"
"No idea. But it was sure fun! I just thought about us going faster, and zing!"
— Pohatu and Photok, Shadows in the Sky

"Hiding and running away doesn’t make us safe or wise … it makes us cowards."
— Photok, BIONICLE.com