At some point, the Dark Hunters stole the Staff of Artakha from its place in the Archives below Metru Nui. The Shadowed One later used it as payment for a weapons order from the Vortixx.

Once Teridax took over the Matoran Universe, he sent a group of Rahkshi to Odina to attack the Hunters. However, the Dark Hunters had since relocated to Xia.[1]

At the time of Teridax's reign, there were at least 250 members of the Dark Hunters.[3][4] 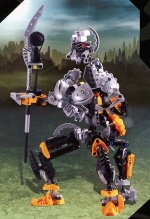