"Vezok's eyes flared to life. Thok met them and saw immediately that his fellow Piraka had changed. Gone was the cold intelligence that had kept Vezok alive all these years, replaced by white-hot anger."
— Narrator, Legacy of Evil

Vezok was a Skakdi of Water and one of the seven rogue Dark Hunters who called themselves the Piraka.

Vezok, like other Skakdi, first lived on the island of Zakaz. At some point, he left the island and became a thief. He once invaded a cave network filled with thousand-eyed Rahi undetected.[2] Vezok later met up with Hakann, who enlisted his help in stealing the Makoki Stone from a Toa Fortress besieged by Frostelus. The two scaled a cliffside, and made it to the fortress. Shoving Hakann forward to distract the Toa guards, Vezok slipped inside and stole the stone, and also discovered its true purpose, as a record of the Brotherhood of Makuta. When he tried to escape, he was found by the Dark Hunter Ancient, who forced him to come to the Dark Hunter's island. It was there that he and Hakann, who had also been captured, went through their entry exams. Vezok passed his by telling Lariska that she could kill Hakann.[2]

As a Dark Hunter, he met with other members of his species and took on several missions, including one where he, Reidak and Avak, released the Kanohi Dragon on Metru Nui. Toa Nidhiki attempted to teach Vezok to open a safe without leaving any evidence, but Vezok failed, as the safe's controls were too delicate for his hands, so he smashed the safe instead. However, Nidhiki decided to let him pass.

Vezok participated in a rebellion against the Shadowed One led by Zaktan, which culminated unsuccessfully with the punishment of the members.[2]

When Kraata-Kal disobeyed the Shadowed One, Vezok was instructed to punish Kraata-Kal.[3] His last mission as a Dark Hunter involved three Turaga and stealing a valuable tablet, which he kept with him to use as a bargaining chip.[4]

At Zaktan's suggestion, Vezok and the other former rebels struck off from the Dark Hunters. Vezok named the new group "Piraka", after an obscenity used by Ancient to describe him. The Piraka arrived at Mangaia and found the shattered armor of Teridax, while investigating rumors of his defeat by a Toa. There was no sign of any organic tissue however and the only thing intact was the Mask of Shadows. While looting the armory, Hakann discovered the Spear of Fusion, which he accidentally set off in reverse on Vezok, creating Vezon. After a small scuffle, all of the Piraka were unknowingly influenced by Teridax[5] and got the same idea: find the Kanohi Ignika which was hidden on the island of Voya Nui. Suddenly they were attacked by two Mana Ko, and Vezon escaped with the spear. The rest of the Piraka escaped as well by discovering that the Mana Ko react to movement; Vezok threw Hakann at them while the others took off running. They all escaped to the surface, where they discovered the Toa Canisters used by the Toa Mata. After Avak set a course to Voya Nui, they departed. Hakann sabotaged Vezok's canister so that it developed a leak halfway, and he also welded the escape hatch shut.[2]

Once they had reached Voya Nui, Vezok used his raw power to break the lid off, and realized Hakann was responsible. Vezok then proceeded to rendezvous with Zaktan and the others, who passed themselves off as Toa to the Matoran of Voya Nui. The Ga-Matoran Dalu approached Vezok and asked what she should do as anger was getting to her. Vezok advised her to kill the island's Turaga and take power for herself. Shocked, Dalu replied that their Turaga had been killed a long time ago, and Vezok mentioned that Turaga were better off that way.

Vezok, along with the others, began directing the Matoran to drain Mount Valmai, as the Piraka believed the Ignika was housed within it. Noticing that the Matoran had begun to grow rebellious, the Piraka struck, enslaving almost all of the population with Antidermis. Shortly after, the Toa Nuva arrived on Voya Nui intending to find the Ignika and save the life of Mata Nui, but were swiftly defeated by the Piraka. They intended to throw the Toa Nuva into the volcano, but when it erupted, they abandoned the plan and ran away.[6] The Nuva later assaulted the Piraka Stronghold, but were defeated again, this time by Brutaka, and imprisoned.[7] At some point, while Avak and Vezok were exploring the Green Belt, they were attacked by Axonn. In their attempt to pursue him, they discovered a Matoran cavern holding historical records. Vezok spitefully destroyed all of the records, but both Piraka were trapped in the cave. They later escaped and continued to search for the Mask of Life.[8]

Vezok was the first Piraka to encounter the Toa Inika. During a brief battle, he was held at swordpoint by Jaller, but copied his and Matoro's powers to make a wall of steam and escape. Vezok was also the only Piraka not in on the plan to steal Brutaka's powers, despite the plan involving some of his power.

He was knocked unconscious during the Battle in the Piraka Stronghold, along with the rest of the Piraka and the Inika by the powered-up Hakann and Thok. He woke up in time to follow the Piraka to the aftermath of a struggle between Hakann, Thok, and the Inika, where they again banded together and headed down into staircase to obtain the Ignika.[9] The Piraka encountered Irnakk, who struck Reidak and Vezok with Zamor spheres, causing them to be locked in an endless battle due to Reidak's power to adapt after every defeat, and Vezok's ability to copy that power. After Zaktan defeated Irnakk, they entered a chamber, where they were forced to work as a team. Reidak thought better of it, and they were dumped in a pool filled with mutagenic water. Vezok found an exit, and they arrived in a large chamber, filled with a flowing river of lava, and a single bridge spanning it. They made it to the bridge, set up a few traps and weapons, and continued on. The Inika arrived, but Kongu brought down the bridge accidentally, and the Piraka continued unimpeded. 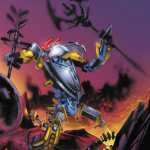 They entered the Chamber of Life, where they encountered their old foe, Vezon, fused to the back of Fenrakk and the Mask of Life. Upon their asking what they could do to get the mask, Vezon replied that they could kill Vezok, which the others assumed to mean that he would give them the mask after they did so. Hakann held Vezok, but Vezok copied Hakann's mental blast to knock Avak out. Vezok was spared when Zaktan deduced Vezon could not give the mask anyway. Vezon then fused Vezok and Reidak together to make the monstrous Piraka Fusion, which proceeded to wipe out the rest of the Piraka. Vezon defused it back into Vezok and Reidak, both of them knocked out. Vezok and the rest of the Piraka recovered in time to see the Inika defeat Vezon and Kardas. They threatened the Inika to give them the Mask of Life, but the Inika refused. Unfortunately, Kardas knocked the mask out of Matoro's hands; the Piraka chased the Inika out of the chamber and were about to attack the Inika but stopped upon noticing their old ally in the clutches of Botar, twelve Toa, and Axonn. He and the other Piraka retreated to hiding, waiting for the perfect opportunity to take the Mask of Life.[5]

As a result of their encounter with the Pit Mutagen, Vezok was mutated, his body dissolving until all that was left of him was his spine and face. He and his fellow Piraka slithered into the Cord, where they murdered a group of Zyglak. They later ambushed the Toa Mahri, but were defeated by Axonn, and taken for interrogation by the Order of Mata Nui.[10] Whilst on Daxia, the Piraka were imprisoned inside a water tank.[11]

Vezok and the other Piraka were taken back to Zakaz after the destruction of Daxia. They were placed in a tank of Energized Protodermis along with other species members and fused into the Golden-Skinned Being.[12]

Once calm and collected, Vezok used to be extremely clever, and an excellent tactician. However, upon having his essence divided to form Vezon, his intellectual edge was lost, as well as his calm demeanor. He was still able to present a cool exterior, but kept his rage and paranoia bottled up within him. He was also prone to violent outbursts when he could not keep his temper in check. He could not stand to be near the other Piraka with the slight exception of Reidak. He had a special hatred for Hakann.

Vezok's impact vision struck those within his sight with a powerful force. He also had the ability to absorb the natural powers (not Kanohi or Rhotuka powers)[13][14][15] of others and then use them himself. He could only store a power for a few hours,[16][citation needed: a few hours?] but was capable of absorbing more than one power at once.[17][18] He had to see the power used to absorb it.[19][20][21] Vezok was also the most agile of the Piraka. He had suppressed Elemental Water powers, which could only be accessed when combining it with another Skakdi's powers.[22] His body is resistant to the corrosive effects of some waters.[1]

In battle, Vezok relied on a Water Harpoon, which had a tow line that pulled him through the water. The Harpoon also had a buzzsaw on the other end that hurled water daggers, compacted water that could strike with great force.

He also possessed a Zamor Launcher, with which he enslaved many of the Matoran of Voya Nui with the rest of the Piraka.

Since his mutation, Vezok has lost his Zamor Launcher and has abandoned his Harpoon.[citation needed] 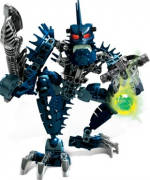 8902 Vezok was released in early 2006 as a canister set. He came with forty-one pieces, including four Zamor Spheres, and shared the action features of the other Piraka canister sets. Vezok's parts could be combined with Thok to build a non-canon alternate model, using building instructions divided between the instruction booklets of the two sets.

A Vezok minifigure was released in the Piraka Stronghold and Lava Chamber Gate playsets of 2006.

Vezok was also part of the McDonald's BIONICLE "Happy Meal" promotion in 2006. The Vezok toy's Zamor Launcher launched cardboard disks with Vezok's name and face when a button on top was pressed.

A life-sized model of Vezok was constructed out of LEGO System bricks, and put on display for promotional events.[citation needed]

"Get on his bad side, and he would wreck you, your home, your village, and your continent — just for his own amusement."
— The Shadowed One, Dark Hunters

"Be still. The others fear your anger, but you should not. If they are too weak to stand up to you, then that means you are meant to command them. Seize control from your Turaga. Take over the island. Then come see me when you're done."
— Vezok (while posing as a Toa) to Dalu, Island of Doom

"Blue armor, nasty spikes, weapons in both hands. I saw him make a rock explode just by glancing at it."
"Sounds like someone we should talk to."
— Toa Inika Nuparu and Jaller, Power Play

"Hakann obviously regarded him only as muscle, not realizing that Vezok had a reputation as a master thief and a cunning strategist. His gruff voice and overly brutal behavior were all a cover for a cunning intelligence. His sharp mind told him only one of them was going to make it off this island alive, and Hakann might be surprised to learn which it would be."
— Narrator, Legacy of Evil

"And if there were a war, are you quite sure whose side you would be on?"
"The same side I'm always on. My own."
— Zaktan and Vezok, Legacy of Evil 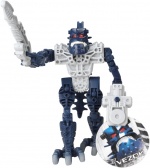