BIONICLE Heroes is non-canon.
The subject of this article is not part of the canon BIONICLE storyline. The information on this page was not approved by the BIONICLE Story Team. Further, it either contradicts canon events or was never referenced in canon media.

This article is about the versions released on home video game consoles and PC. You may be looking for the DS, Game Boy Advance or Mobile Phone versions.

BIONICLE Heroes is a video game released by the LEGO Company, Travellers Tales and Eidos in 2006, featuring the Toa Inika, Piraka, and others. The second and final BIONICLE home console video game, it follows a non-canonical plot similar to its predecessor.

The objective of the game is to defeat the Piraka and their "minions" in order to retrieve the Mask of Life. In the Playstation 2, Xbox 360, PC, and Wii versions, the player controls a Toa capable of changing into a different Toa Inika via collected Kanohi masks. The game is split into seven areas; the first six are of individual Piraka and the final one of Vezon. There are four respective levels in the first six areas.

Along with defeating enemies, the player must destroy or create certain objects to obtain points.

A mysterious Toa washes up on a beach on Voya Nui in a Toa Canister. Following a trail of footprints, the Toa finds Balta in a small shelter, and the Ta-Matoran explains that the Piraka have taken over the island and stolen the Ignika. Balta then hands the Toa a Kanohi Calix, giving him the appearance and form of Toa Inika Jaller.

Balta takes the Toa back to the Matoran enclave, where they use portals to access different areas of Voya Nui and combat the Piraka. Once all six Piraka have been defeated, the entrance to the Chamber of Life opens, and the Toa, by then in possession of all six Inika masks and powers, enters the Chamber and battles Vezon and Fenrakk, eventually defeating him and recovering the Mask of Life. With Voya Nui freed, the game ends.

This serves as a hub for the game, and is where the player starts after loading a game or completing a level.

At the back of the Enclave, Balta runs a shop selling three different things:

This area contains sculptures of the six Piraka, which rise to reveal rooms with portals to the rest of Voya Nui.

Once at least one level has been completed, the four arches over the entrance to the Zone Select open. Each leads to a chamber displaying creatures unlocked in-game by collecting silver canisters. The first chamber on the left displays Bohrok-Kal, the second Visorak, and the third Vahki, with each creatures name appearing when they are aimed at. The fourth chamber displays mini-bosses, which are unlocked by defeating them in game. Each mini-boss is in their own canister, and when the canister is opened set information and a short bio are displayed.

This area becomes available once at least one level has been completed. The display grids are navigated using the movement controls. There is a different grid on each wall:

This is an area where the defeated Piraka end up. Mini movies activated in the Playground can be purchased at Balta's shop. Also, at the far side of the playground, the three bonus levels can be found which tests how many enemies, either Bohrok, Visorak, or Vahki, the player can defeat in two minutes. 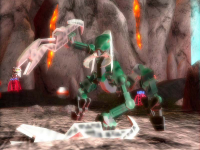 A Vorzakh in BIONICLE Heroes

These are the final enemies of each level in each zone.

To complete the game and achieve 100%, the player must fully upgrade all Toa, collect all silver and golden canisters, buy all tips and Piraka Playground items, and achieve assorted goals.