Copper Masks of Victory are powerless Kanohi with ceremonial value.

Copper Masks of Victory are made of metallic protodermis.[2] Forged in a copper color, they were originally awarded to Akilini champions, who wore them on Metru Nui. The Toa Metru later brought the Kanohi to Mata Nui, where they were awarded to Koro entertainment champions.[1] The masks were forged in the shapes of Noble Kanohi Huna and Noble Kanohi Komau.

During the Great War, Makuta Teridax had his infected Rahi steal and hide the copper masks in an attempt to crush the Matoran's morale.[3] 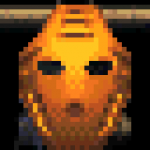 Takua's Copper Mask as seen in BIONICLE: Quest for the Toa

Copper Masks of Victory were released to BIONICLE fans in special promotional events in 2001. These events were held at LEGOLAND parks as well as certain retail stores. Originally, Copper Huna were meant to be exchanged for a coupon which was located at the bottom of a promotional Toys "R" Us Kanohi-themed poster. However, they were instead given out to anyone who purchased a BIONICLE set. Huna were also given away as prizes at a Toys "R" Us promotion which featured two contestants using the Manas' remote control function to duel one another. The Copper Komau was much rarer in comparison, given away only at LEGOLAND Billund and Windsor alongside the Copper Huna.

In Germany, one Kanohi was included in Nestlé cereal packs for a certain time, and there was a slim chance at receiving a Copper Huna. The pack also featured information concerning the Copper Huna itself, although not corresponding to canon, since the mask was said to be several times more powerful than other Kanohi and had disappeared for a long time.

In 2003, Blockbuster Video offered Toa Nuva sets with copper Huna included with them as part of a promotion for Mask of Light.