"This time, she saw a place she did not recognize. Makuta Chirox was there, and a silvery pool, but not just any pool, no, this one had a figure emerging from it: a being actually made of Energized Protodermis. She concentrated hard and the location came to her: an island just north of the one her newest ally came from."
— Narrator, Destiny War

The Mask of Psychometry is a Kanohi that allows its user to learn details about the past of an object by making physical contact with it. While the user can see something of an object's past, they have no real control over how much information they actually receive. This power cannot be used on more than one object at a time, nor does it work on living beings.[1] The mask would work on the armor of Spherus Magna inhabitants.[2]

Helryx used her Mask of Psychometry in Destiny War to learn the past of Rahkshi fragments in an attempt to trace their origins. 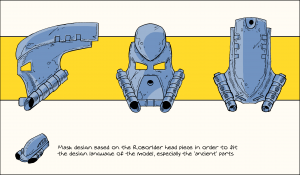 The Mask of Psychometry from alternate angles