This article is about the character. You may be looking for the location.

"Creation is my essence, and you would destroy all that exists. I can't allow that."
— Artakha to Toa Helryx, Reign of Shadows

Artakha is an ancient and powerful craftsman. After defeating his "brother" Karzahni in combat long ago, Artakha ruled over an eponymous, legendary island realm in the Matoran Universe.

History of the Matoran Universe

Before Mata Nui's spirit was created by the Great Beings, Artakha and Karzahni were created and given their own realms to guard by the Great Beings. Artakha chose to name his land after himself.[2] Soon after his inception, Artakha and his brother competed for the Legendary Mask of Creation, a fight which Artakha won.[3] While Karzahni lived in a place where Matoran were sent to be repaired, Artakha chose to govern a place of light where Matoran could work in peace and comfort.[2] During this time, Artakha acted as an engineer, creating various objects for anyone who asked, including weapons for the Order of Mata Nui. Among his other creations, Artakha created the Toa Mata, the armor and masks of the Makuta[4][5][6][7] as well as the Axalara T9, Jetrax T6, and the Rockoh T3, and placed the three vehicles inside the Codrex in Karda Nui.[8]

Believing he had the ability to make his own Rahi, Artakha managed to create four Crystal Serpents. However, the Serpents were too wild, and unable to be tamed. Artakha refused to destroy his creations, and instead released them to the wild. He thus turned his attention back to creating tools and masks, such as the Staff of Artakha.[9]

Thousands of years later, an invasion orchestrated by the Brotherhood of Makuta, led by Makuta Kojol, took Artakha by surprise. Utilizing every aspect of his island's defenses, he managed to stall the invading forces, but was unable to halt them entirely, and they breached his fortress. Kojol personally entered the fortress and managed to make off with the Kanohi Avohkii, one of Artakha's creations, alerting the ruler to the involvement of the Brotherhood.[10]

In response to the invasion, Artakha requested that the Order of Mata Nui destroy all maps and charts of his island. The Order eliminated any being with the knowledge of Artakha's location, including Kojol and members of the Order.[11] The inhabitants of Artakha's realm also destroyed a land bridge connecting it to a larger, uninhabited island.[3] Eventually, Artakha and his island were gradually forgotten and faded into legend, and he was left to continue making supplies needed across the universe.[12]

During their visit to the realm of Artakha, the Toa Nuva spoke to Artakha from outside his fortress, and Artakha asked to hear the tales of the Nuva's recent adventures. After listening to them, Artakha gifted the Toa with Adaptive Armor and teleported them to Karda Nui.[13] After the Toa Nuva escaped Karda Nui, Artakha transported the three vehicles they used back to the Codrex.[14]

Shortly after Makuta Teridax took control of Mata Nui's body, he launched an attack against Artakha. Knowing that his island might fall to the Rahkshi, Artakha reached out with his mind and contacted Lewa, who was approaching to rescue him. After informing Lewa of his situation, he transported the Toa of Air to Tren Krom's island.[15]

Tren Krom later contacted Artakha, having stolen Lewa's body, requesting assistance to get to Metru Nui. Artakha pondered the notion of granting his request, and eventually complied, transporting Tren Krom to the Archives. Artakha warned Tren Krom to keep his end of the bargain he had made with Lewa, and threatened to destroy the body if he decided to remain within it.[16]

Artakha later teleported himself to the Core Processor, interrupting a heated battle between Tuyet, Miserix, Brutaka, Axonn, Tren Krom, and Helryx[17], which he had previously interfered in by teleporting Helryx to safety.[18] Artakha ordered Tren Krom back to his island, and when the ancient entity disagreed, Artakha prevented him from taking Lewa's body, swapping back Tren Krom's and Lewa's minds. Helryx confronted Artakha about his interfering actions, but they were stopped by Teridax, who teleported the whole group outside of the Matoran Universe into space.[19]

Artakha and the other beings were saved from suffocation by Lewa, who created air bubbles around their heads. Artakha tried to teleport them back into the Core Processor, but found his attempt blocked by Teridax. He suggested teleporting the group directly to his destination, but warned them of the risks involved with the process. Before he could trigger the power, the group was saved by Vezon, who pulled them through a dimensional window, into a tower on Bota Magna, which served as the prison chamber of a Great Being maddened and cursed by the powers of the Ignika.[20] The Great Being bid the assembled beings free him, and Artakha and the others immediately began arguing over whether or not they should do so.[21]

Outside, Velika rigged the fortress to explode and destroy everyone within.[22] Artakha and the other biomechanical beings managed to escape the fortress.[23] Unbeknownst to them, the cursed Great Being escaped as well.[24]

In this alternate universe, Artakha still made the Great Disks, but chose to keep them to study, and later discovered how to make the Kanohi Vahi.[25] He later handed over the Kanohi Vahi to the Toa Empire, as requested by Toa Tuyet.[26] He also told her where the Toa Mata were located, though not how to reach them.[27]

Artakha is a physically imposing figure, standing at roughly ten feet tall, and clad in grayish green armor that is decorated in ancient symbols.[19][28][29] He is capricious, unforgiving and unpredictable, a creature of sudden inspiration and random whim.[30][31]

He is a highly skilled creator, enabling him to make a variety of objects and weapons, and is one of the few beings in the universe known to be able to manipulate Protosteel. Artakha can create Toa, but only does so if Mata Nui or the Great Beings request it and supply the necessary materials. However, he lacks experience in working with viruses, and has trouble making Rahi. Artakha was initially a generous benefactor to the universe; it was said that, should a Matoran want the impossible built, they should leave the materials at the gate of his fortress and return the next day to find their desired object made for them. However, after the Makuta invaded his island, he became reclusive, refusing contact with anyone outside the island, though he still monitored the events of the universe.[3]

Artakha possesses a powerful telepathic ability, one able to breach the shields of Karda Nui[32] and undo the mind-switching powers of Tren Krom.[19] He can also teleport himself, other beings, and objects to different locations by warping space around his target.[33] This power is able to bypass the shields of Karda Nui,[32] but can be blocked by the Great Spirit Robot.[20]

Artakha wears the Legendary Mask of Creation, a Kanohi that allows him to envision what he plans to create and how to make it before he actually crafts it. It can also create objects which Artakha knows how to make.[34] He is one of the few beings capable of fully harnessing the power of Legendary Kanohi.[35]

Artakha was not known to carry weapons, only using tools needed for creating. However, when he traveled to Metru Nui, he took along a hammer from his forge[36] to use as a warhammer.[37]

"Once we are there, my master will speak with you ... or not ... depending on his whim. He may open his fortress for the first time in millennia and welcome you in — or he may banish you forever without a second thought."
— A Matoran to the Toa Nuva, Toa Nuva Blog

"The voice was indescribably ancient, and yet young at the same time. It came from everywhere around them — the fortress, the rocks, the trees, even the air itself."
— Narrator, Downfall

"You amuse a being who was already weary of life before you set foot on solid ground, Toa."
— Artakha to Kopaka, Downfall

"You... imbeciles. You ignorant stone apes... is this how you try to save existence?"
— Artakha, Reign of Shadows

"Artakha stood in the shattered doorway, facing some of the most powerful beings in existence. His stance made it clear he was their equal, if not their superior."
— Narrator, Reign of Shadows

"None of us choose our destiny. And none of us can defy it."
— Artakha to Tren Krom, Reign of Shadows 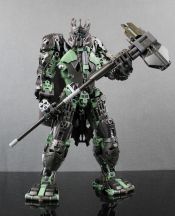 The Artahka model by Connor Hoffman (Wombat Combat Pictures) with a Mask of Creation designed by Brian Khổng (KhingK).