"This time, to his surprise, the blade was glowing with crimson fire. When he swung the sword, it sizzled through the air, trailing sparks in its wake."
— Narrator, Tale of the Toa

The Fire Sword,[1] also known as the Sword of Fire,[2][3] was Toa Mata Tahu's Toa Tool. It was composed of two blades designed to be fitted together. The Sword could be used to channel Tahu's Fire powers, burn through obstacles, and utilized in melee combat.

The Fire Sword in use

The Fire Sword was also used by Toa Kaita Akamai, a being resulting from the fusion of Tahu, Onua, and Pohatu. Like Tahu, Akamai wielded the Sword with his right hand.

When Tahu was transformed into a Toa Nuva by Energized Protodermis, the Fire Sword turned into twin Magma Swords.

In the Mata Nui Online Game, Tahu used his Fire Sword to burn and cut his way out of a wooden trap set by the Ta-Koro Guard intended to snare Infected Rahi. 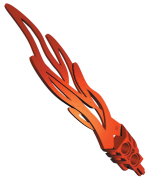 The Fire Sword in set form

In 2010, the set 7116 Tahu included the Adaptive Fire Sword. The blade of this version was blended from translucent red and orange plastic. The new version also had a silver pommel, which could be replaced with a gold pommel from 7136 Skrall, as part of the Golden Armor.

The LEGO Group produced life-sized foam versions of the Fire Sword, which were sold at certain LEGO kiosks, alongside life-sized Quake Breakers and Magma Swords.