This article is about Onua's tools. You may be looking for Nuparu's.

"He listened for another second or two, and then struck with his fists. He broke through the tunnel wall, burrowing straight through the solid earth."
— Narrator, Beware the Bohrok

The Claws were the Toa Tools used by Toa Mata Onua. Although referred to as Toa Tools, the Claws were actually Onua's hands. Onua used the Claws to quickly dig tunnels throughout the underground of Mata Nui, to channel his Earth power, and also as weapons in melee combat.

When Onua transformed into a Toa Nuva by Energized Protodermis, the Claws became a pair of Quake Breakers. 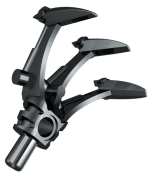 A Claw in set form

In the Mata Nui Online Game, Onua used his Claws to tunnel into a hive of Nui-Rama.

The Claws were originally included with set 8532 Onua, released in 2001.

The LEGO Group produced life-sized foam versions of the Onua's Claws for use as play weaponry.[1]