"Kopaka raised his sword and unleashed a hail of ice that shocked Takanuva, knocking the Toa of Light to the ground. Standing over him, Kopaka held the point of his sword to Takanuva's neck."
— Narrator, Dark Mirror

The Ice Sword was one of Toa Mata Kopaka's Toa Tools, along with his Ice Shield. The Sword could be used to channel Kopaka's elemental Ice powers, and for melee combat.

The Ice Sword was also wielded by Toa Kaita Wairuha, who held it in his right hand, together with Lewa's Axe.

When Kopaka was transformed into a Toa Nuva by Energized Protodermis, the Ice Sword became a pair of Ice Blades.

In Into the Nest, Kopaka used his Ice Sword to channel his Ice powers, creating a cage around a group of Tahnok Va. 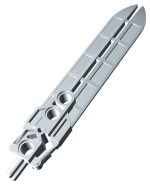 The Ice Sword in set form

The Ice Sword was originally included with the set 8536 Kopaka, released in 2001.