"Less than fifteen minutes later, they were on the march, over one hundred Toa with Lhikan and Nidhiki in the lead. Clouds of dust kicked up under their armored feet as they traveled well-worn paths through Po-Metru. Each of them had lost a brother or a sister Toa in this war, and all wanted it to end. But not before they had made the Dark Hunters pay in full for their crimes."
— Narrator, Birth of a Dark Hunter

In the Matoran Universe, there arose many other Toa who do not belong to Toa teams or about which fairly little is known. All of these Toa who survived have immigrated to Spherus Magna. 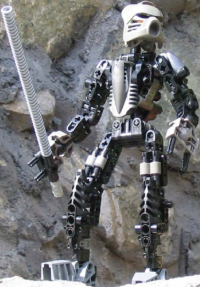 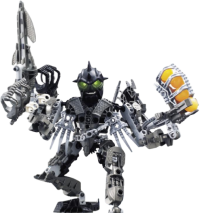 Toa Jovan, leader of his team

Led by Jovan, this team was formed 80,000 years ago[24] and protected an unknown region.[25] They became the first to reach the Kanohi Ignika, traveling during the Great Disruption. They successfully claimed the mask and used it in Karda Nui, healing Mata Nui at the cost of one of the team's members. Several of the survivors became Turaga serving in other places.[26]

The team's destiny was to use the Mask of Life.[27]

This team was originally two separate teams, who came together in order to fight off Protocairns and Parakrekks, and stayed together after the battles due to the success of their teamwork. This team would send members off in pairs on missions around the universe. During one such assignment, Norik and Varian encountered the Dark Hunters, who kidnapped Varian but released Norik.[3] Norik eventually left this team to join the Toa Hagah, and his remaining teammates presented him with metallic armor and weapons as a badge of honor.[32]

This team was active around 7,000 years ago, defending the Makoki Stone at a Toa Fortress. All but one of the members died in an attack from Frostelus.[33] Karzahni later trapped Lesovikk in an illusion in which the Toa Cordak came to the aid of this team and saved them from utter destruction at the hands of the Frostelus.[34]

During the Toa-Dark Hunter War on Metru Nui, Lhikan commanded more than 400 Toa,[39][40] most of whom are now either deceased or transformed into Turaga.[citation needed] The army was originally comprised of nearly 100 members who arrived in Metru Nui after Naho escaped from the city and begged for help.[39] Another 300 Toa[40] came to Metru Nui at the very end of the war to surround the Dark Hunters and force them to surrender.[11] This is considered the largest Toa team to have ever existed.[citation needed]

A team of Toa assembled by the Toa Nuva to locate the Great Beings after the Restoration of Spherus Magna, with Gelu as their guide. 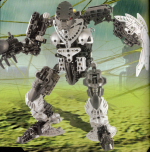 In The Kingdom Alternate Universe, Matoro failed to revive Mata Nui and the survivors of his death were forced to flee to the island of Mata Nui. Takanuva created at least six new Toa before becoming a Turaga:

In the Toa Empire Alternate Universe, there exists a Toa Empire led by Tuyet. Known miscellaneous Toa in the empire include:

In this dimension, the Great Spirit Mata Nui was never built, and the Toa were designed to be small and agile in order to complete their mission: retrieve Energized Protodermis from the core of their world, Spherus Magna, and repair it as well as possible. Known Toa of this universe include:

In this universe, Mata Nui completed his mission with little difficulty and reformed Spherus Magna. The Toa then took up positions helping the Agori and Glatorian to rebuild their villages. Known Toa of this universe include: