"He pledged to defend them against Skrall raiding parties, hungry Vorox, Bone Hunters and any other threats. He also made sure he got paid up front."
— Narrator, Raid on Vulcanus

Gelu is a Glatorian who retired to work as a convoy escort for the Ice Tribe.

On Spherus Magna, Gelu lived with other members of the Ice Tribe which was governed by the Element Lord of Ice. He fought in the Core War for the Ice Tribe, but was a reluctant combatant.[2]

Gelu was stationed as one of the guards at the Energized Protodermis Spring, and once was trapped in vines by the Jungle Tribe. After many more Fire Tribe attacks, Gelu grew tired of the war.[3][2]

He deserted the army and headed south to the White Quartz Mountains, but the war eventually spread to the area as well. During a battle, Gelu's best friend Surel was badly wounded and believed dead. Gelu searched for him, but never found his friend. When the Shattering occurred, Gelu was in the desert region of the planet, which was the largest fragment and formed a separate world called Bara Magna.[2]

When the arena match system was developed, Gelu, as a Glatorian trainee, received training from both Metus and Certavus. When Certavus died, Strakk took his place as the primary Glatorian of the village, and Gelu became the Second Glatorian.[2][4]

As they could not spare Strakk at the time, the Ice Tribe at one point chose Gelu to fight Ackar. Gelu lost the fight, and Iconox became in debt to Vulcanus for a large amount of Exsidian.

Gelu in the arena

Gelu traveled to the Arena Magna in order to participate in the yearly Great Tournament.[5] However, the first match was interrupted by the invading Skrall army, and Gelu retreated to Iconox with several other Agori. He retired from being a Glatorian shortly after the attack,[2] and began making a living as a caravan guard, preferring the pay to that of a Glatorian. His guard duties brought him in frequent opposition to the Bone Hunter Fero.[6]

While guarding a convoy heading to Tajun, Gelu spotted Fero preparing to attack him. He ordered the Agori to take the caravan in a different direction, and went to confront the Bone Hunter. Fero forced him off his Sand Stalker, and battled Gelu on foot. Gelu managed to disarm the Bone Hunter and discovered a map of Vulcanus that Fero had in his possession. Unable to extract any information from Fero, Gelu broke the Bone Hunter's Thornax Launcher and rode back to the caravan, saving it from a group of Zesk. After arriving in Tajun, Gelu encountered Metus, who attempted to recruit the former Glatorian for the Water Tribe. Gelu declined, not wanting to get into the business again. Upon hearing that Metus was heading to Vulcanus with Gresh, Gelu requested to join them.[6] 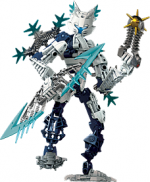 As they neared Vulcanus, they discovered a caravan with a broken wheel. Gresh insisted that they assist the Agori of the convoy, and helped fix the wheel. Accompanying the caravan to Vulcanus, the group was attacked by Vorox. Gelu and Gresh were able to defend the convoy and safely escorted it to the Fire village.[6]

Gresh and Gelu began conversing at an inn while in Vulcanus, sharing their experiences as Glatorian. When Raanu entered the building, Gelu broke off the conversation to speak with him, showing him the map he had obtained from Fero, which, being highly detailed, revealed the Bone Hunters' knowledge of Vulcanus' defenses. Raanu asked Gelu to head a defense team for the village, a job that was claimed by Ackar when he arrived at the inn.[6]

As part of their plans, Gelu and Ackar traveled out into the wastelands, and met with Malum. Despite his hesitation at working with the ex-Glatorian, Gelu agreed to assist them in attacking the Bone Hunters. With the help of Malum's Vorox, Gelu and Ackar were able to thin the ranks of the Bone Hunters, and retreated to Malum's cave. Malum refused to join them in defending Vulcanus, but wished them luck in the battles ahead.[6]

When the two Glatorian returned to Vulcanus, they began laying traps for the Bone Hunters. A strike team, led by Fero, attempted to infiltrate the city by traveling through the Iron Canyon, though they encountered Gelu and a number of traps set for them. The Bone Hunters seemingly retreated after the battle. Raanu, upon hearing the results of their defenses, insisted that the raid was successfully averted and forced the Glatorian to leave the city. Gelu traveled with the defense team to Tesara, where they recruited Vastus to help their cause. The group returned to Vulcanus during a second raid, and eventually defeated the Bone Hunters.[6]

While escorting a caravan through the Dunes of Treason,[7] Gelu was attacked by a band of Skrall. Gelu took shelter behind a cropping of rocks, and used it as a vantage point to strike at the Skrall. During the attack, the Kanohi Ignika entered the atmosphere, emitting a blinding light. Gelu took advantage of the distraction and escaped from the Skrall.[8]

After the tribes agreed to unite against the Skrall who were attacking them, Gelu helped to fortify Iconox.[9] He then participated in the fight against the Skrall in Roxtus, during which he was badly wounded by Stronius. He then pursued the warrior into the Black Spike Mountains. He was unable to defeat the Skrall, however, and eventually returned to the Mega-Village newly formed from the united villages, to join the new Glatorian defense force under Ackar's leadership.[2][10]

The Glatorian were relieved from battle with the Rahkshi with aid from Tahu using the Golden Armor, which defeated the Rahkshi. Mata Nui was then able to complete his mission of reforming Spherus Magna from Bara Magna, Bota Magna and Aqua Magna, allowing the Glatorian and Agori to live with fewer troubles as he revitalized the planet, creating a paradisiacal world.

In need of a guide for Orde, Chiara, and Zaria on their mission to find the Great Beings, Onua recruited Gelu, who took the job despite believing in the futility of it. He initially clashed with Orde when the Toa read his mind but relaxed once the two were broken up by Chiara. After setting out, Gelu warned them against unnecessary talking, though the Toa did not always heed his advice.[11]

The team passed into Bota Magna on Sand Stalkers, and Gelu concentrated on scouting out the terrain while Orde discussed his history with Chiara. Realizing they could be ambushed, Gelu had Orde scan for minds in the area and had Zaria and Chiara cover the flanks. Despite his precautions, they were attacked by a group of Vorox and led into a trap. Chiara freed them, but the Vorox threatened them with sophisticated weaponry, which Gelu was surprised to see due to their rarity and complexity. The Vorox leader began speaking, shocking Gelu, and identified himself as Kabrua, a Vorox from Bota Magna which had not socially regressed like the Bara Magna tribe. The information revealed by the Vorox and their possession of the weaponry caused Gelu to think they might know the location of a Great Being or where one had been, and he began stalling for time to acquire answers.[12]

Gelu and the Toa were taken to the edge of the woods, where the Vorox released them, intending to hunt them down. Zaria attempted to construct an ambush, but failed when the Vorox revealed a way to nullify their elemental powers. Gelu and Orde separated from the other two, and tricked the Vorox into thinking they had crossed the river by doubling back and hiding in a tree. From there, Orde probed Kabrua's mind, and discovered that they were receiving their information from a Matoran Universe resident, who was really a Great Being in disguise.[13]

Despite serving as a Glatorian, Gelu never enjoyed the job, and saw a greater use in being a caravan guard. Although he often acts aloof, he is always willing to help, though he enjoyed the payment that he received and insisted on half of the reward upfront. He became reputed for his dedication and concern for the welfare of his clients.[2]

He is an excellent tracker and scout, talents honed by his former profession.

Gelu wielded the double-bladed Ice Slicer and a Thornax Launcher, although they were confiscated by the Vorox.[13]

Gelu was released as one of the six "Glatorian Legends" canister sets in the latter half of 2009. The set contains fifty-two pieces including a life counter for use in the BIONICLE Action Figure Game.

"Agori, you've been in danger since before Bara Magna had moons. Now do as I say."
— Gelu, Raid on Vulcanus

"Well, I thought this was going to be an easy job... small caravan, short route, far from Vorox nests... a cinch. I should have remembered - this is Bara Magna. There are no easy jobs here."
— Gelu, A Hero Reborn

"His name is Gelu. He's going to be our guide, but he's not too happy about it."
— Orde, The Yesterday Quest